The Mad Max Wiki
Register
Don't have an account?
Sign In
Advertisement
in: Films, Characters, Antagonists,
and 2 more

Aunty Entity, played by Tina Turner, was a ruthless ruler of a post-apocalyptic civilization known as Bartertown in the Australian film Mad Max: Beyond Thunderdome.

Aunty Entity is not a standard villain. When creating the character, George Miller started with an assumption that 'today's tyrant is yesterday's hero'. Aunty Entity built Bartertown with good intentions, trying to rebuild civilization, bring back trade and give people hope for tomorrow. Unfortunately, according to Miller, in the process she became a tyrant[1]:

Tina Turner was selected to play the role because she is perceived as a positive persona and to give the sense that Aunty Entity was once a hero which amplifies how tragic that character is. She was selected because Aunty's age was to be indeterminate, to underline the fact she is a survivor with a lot of charisma, capable of building a place like Bartertown and that she represents both good and evil. Aunty's personality reflects Max's in a way that she built a physical world for herself and she will not allow for any evolution or change, much like Max who is incapable of letting go of his past. It was argued by George Miller[2] that, should Max join The Lost Tribe and rebuild civilization in destroyed Sydney - he would become just like Aunty Entity, desperately protecting his world to eventually become a tyrant. Max's connection to his past is internalized however, unlike Aunty Entity's which is represented by Bartertown. Ultimately she recognizes that Max and herself share the same qualities, which is the reason she spares his life at the very end of Mad Max: Beyond Thunderdome.

Aunty Entity claimed that before the 'pox-eclipse' she was a nobody, but the day after, she had the chance to become a somebody, for she was one that survived. At some point following the fall of civilisation she had become powerful enough to establish Bartertown as a permanent trading settlement, fortify it, and impose a brutal semblance of law and order upon it's residents and those who came to trade. As she tells Max in no uncertain terms, she will stop at nothing to defend the parody of civilisation she has managed to establish.

She was an Amazon-like woman who ruled with an iron-fist but found herself being challenged by the diminutive Master and his brutish henchman Blaster: Aunty Entity is enraged at this but is unable to publicly oppose the duo of "Master Blaster" due to Master being the only one who knows how to work all the machines that keep Bartertown running.

To this end the scheming Aunty Entity manipulates Mad Max into a gladiatorial battle (known as the "Thunderdome") against Blaster with hopes Max will kill him, in effect using Max as a convenient means of exacting political assassination without disrupting the precariously constructed charade of lawful order that prevents Bartertown from erupting into chaos. Thunderdome is a ritual gladiatorial combat, to the death. The well known rule of Thunderdome is ''Two men enter, one man leaves.'' Conflict within the town is thus resolved with finality, and according to the law.

Max manages to defeat Blaster in combat but refuses to kill him when he realizes, after knocking Blaster's helmet off, that he suffers from Down Syndrome. Aunty Entity is enraged and has Blaster executed, to satisfy the requirement that only one man can leave the Thunderdome alive, before invoking the harsh ritual of "bust a deal, face the wheel" upon Max. Max's spin of the wheel lands on 'Gulag,' and he is exiled from the town to the harsh desert outlands where his chances of survival seem bleak at best.

However, Max is rescued from near death by a band of children living in a utopia valley oasis hidden beyond the desert wilderness. As Max recovers he learns of their cult-like belief in "Tommorrow-morrow-land" -- a mythical paradise they have based on their mythologised memories of civilization. Max tells them that all the things they seek used to exist, but were destroyed by the apocalypse they cite as part of their telling of their past.  He tells them that if they leave their secluded paradise, the first thing they will find is the treacherous Bartertown, assuming the desert doesn't claim them first.  However a small band of the children refuse to listen and head off regardless - Max has little choice but to pursue them.

Max catches up to the children just as they are being swallowed by a large sinkhole in the sand dunes.  Max manages to help pull some of the children to safety, however at least one is sucked under and lost.  They have already reached the outskirts of Bartertown, so they continue on together in search of Master. The tiny Master has been reduced to little more than a slave by Aunty Entity due to the death of his protector, Blaster. Max and the children free him, however the guards are alerted in the process and a frantic chase ensues between Aunty Entity's driving elite, and Max and the lost children who are escaping with the Master in a modified truck that rides on train tracks. The disruption of Bartertown's methane factory results in it becoming damaged and exploding. Max and his followers ride the rail line until it ends, which is very near the hideout of the pilot that attacked Max in the beginning of the movie. Max coerces him to help them escape in the Captain's Transavia PL-12 Airtruk, but there is too much weight and not enough runway between them and the attackers' vehicles, so Max takes a truck and drives it in front of the airplane, smashing a hole in the roadblock enabling the children to escape. Aunty finds Max, and perhaps in recognition of Max's selflessness, she unexpectedly appears to experience an epiphany of self-awareness, seeing herself as the tyrant she has unintentionally become. Surrounded by her guards, she looks down at the helpless Max. Having earned her respect and reawakened her empathy, Max is allowed to live. 'Aint we a pair...' She declares. She then departs, to presumably make good on her vow to rebuild Bartertown.

What becomes of Aunty Entity's civilization and the political position she once had remains unknown at the conclusion of the story.

Aunty Entity has great influence over Bartertown, and her scheming, political mind has secured her leadership over the town. She advocates many laws which she claims she wrote, and has established a series of rituals which have woven themselves into her brand of civilization to ensure her continuous leadership.

Despite all that she has helped build and for all the political cunning she wields, her lack of the scientific knowledge about the workings of Underworld leads to her inevitable downfall.

Aunty Entity is a fan of music and has a creative mind, she has her own musician, Ton Ton Tattoo, in her quarters who plays the saxophone for her. Aunty Entity may well be a musician herself (see We Don't Need Another Hero). 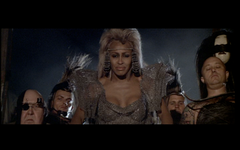 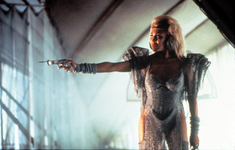