Bartertown is a remote market-town outpost situated in the midst of the Wasteland. It was likely created during the two decades that saw Max wandering the Wasteland. Its primary focus and income is the trade and bartering with scavengers in the area, and travelers passing through.

In the original script, Bartertown is described to be located near a vast salt lake called The Devil's Anvil. At the very edge of that salt lake there is what was once an open-cut mine, which is the location of Bartertown.

The town is situated in a rocky outcrop protruding out of the desert, and was likely to have been the location of a mining operation at some point in time, a railroad exiting the facility strengthens this possibility.

The creation of the town is debatable, with Aunty Entity's claims susceptible to a certain bias. She tells Max that she built the town from the desert with her own hands. It is not explained how she was able to create the town.

The original script describes Bartertown as a jumble of huts and shanties, spilling down the roads and terraces of the old mine, circumscribe a central square. Everywhere great black pipes emerge from the earth, belching smoke, steam and flames. The town is powered by the methane gas extracted from pig feces in Underworld, the catacombs beneath the town. Underworld is maintained by a workforce comprised of those who "ask for work", as well as convicted criminals, with the convict Pig Killer being a member of this downtrodden workforce. Aunty Entity's Penthouse Tower stands in the middle of the town.

Bartertown borders with The Devil's Anvil - a vast salt lake with unforgiving conditions. That is where all the unfortunate people are sentenced to 'Gulag', which in Bartertown means death through exile, not life imprisonment. According to the original script - In this spot there are 32 poles signifying the number of people sentenced to death through Gulag. Max's banishment into the desert marks the 33rd pole.

The town is the most 'civilized' outpost in the Wasteland and it offers a variety of activities as well as opportunities for trade and work. According to the original script: "In the crowded square blacksmiths and wheelwrights hammer away at their trade, merchants tout their wares and men are trading. Chickens for grain, grain for alcohol, alcohol for sex. Directly in front of Max is a signpost which directs traders to the various delights and services of Bartertown: PARADISE ALLEY, GARDEN OF PLEASURE, BLACKSMITH, SMALL ANIMALS."

There is a brothel, barber, doctor, dentist, butcher's, open auction market, repair shop, a bar, various trading stands and of course the center of all disputes - the Thunderdome. The Underworld is ruled by Master Blaster and as such shows a different side of Bartertown - convicts working there in extremely poor conditions, general filth due to the production of methane from pig feces, the dark and dusty garage populated with mechanics and imperial guards and brutal activities such as the 'spike game' where the loser gets his hand impaled on an array of spikes.

At the time that Max passed through the town, there was a notable political tension between Aunty Entity and a tech-savvy dwarf called Master. Bartertown is ruled primarily by Aunty Entity, though Master [Blaster] openly, and publicly claims to "run Barter Town", forcing Aunty to endorse their leadership through energy embargoes.

Aunty claims to have brought a sense of law and order to the town, dispelling the chaos, murder, and thievery for a healthy trading economy and security, giving the people a sense of hope instead of despair. Her view of Bartertown is one of continued civilization, and vowed to Max that she would do anything to protect it.

Bartertown is protected by an armoured guard under the authority of Ironbar. They are characterised by their dark plastic combat-armour and their diesel punk-styled feathered headdresses. They are made up of both men and women.

They brandish weapons such as spiked batons, whips, chainsaws and even Japanese Nunchaku.

The vehicles in Bartertown belong exclusively to Aunty Entity and her Guards. Vehicles, being a highly wanted commodity, are not subject to trade, as exemplified by Max's Camel Wagon, which was immediately incorporated into the fleet of Imperial vehicles, whereas camels themselves were sold at an auction.

The vehicles do not resemble traditional automobiles, due to decades of exploitation in harsh environments which left them stripped to bare chassis. All Bartertown vehicles are powered by methane which required the vehicle bodies to be light, therefore they are made of piping of sorts. Exceptions from that rule are only Max's Camel Wagon which has an XB Sedan cab in it, and the stationary Mack Truck, which still resembles its original form. The chassis of other vehicles range from Land Rovers to Ford F-Series.

Amongst the standard vehicles, Imperial vehicle fleet sports many motorcycles and sandrail buggies. The most unique vehicle of the fleet is Auntie Entity's helicopter-turbine vehicle. One is led to believe that the vehicle is propelled by a jet propulsion system, that is not the case, however. Early concept drawings reveal that the vehicle is actually powered by a standard V8 engine, well hidden beneath the amounts of wiring and piping. The turbojet engine seems to be purely for show.

"In the beginning, George Miller mentioned that it had a kind of African feel, and the buildings' design came out that way. But then, it all changed and the crazy chimneys went up (...) we didn't want to make anything similar (...)That's why our cars are the way they are. They've gone a bit further. Now , they're just engines with a skeleton frame. There are no auto bodies left, just bits of scrap. People live in them." 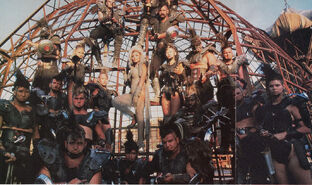 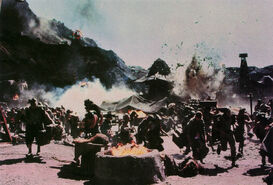 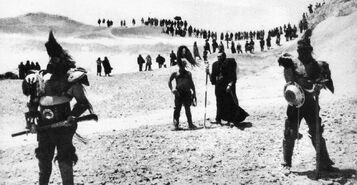 Gulag area just outside of Bartertown 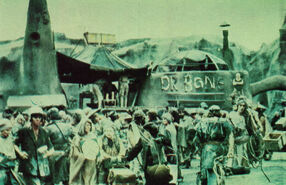 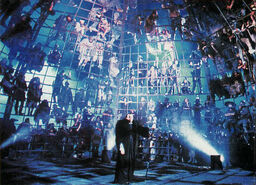 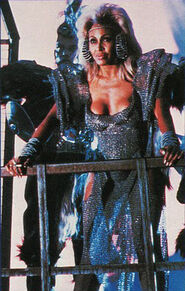 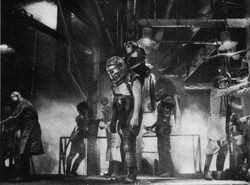 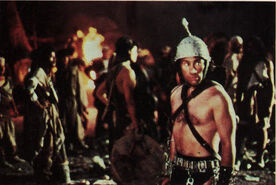 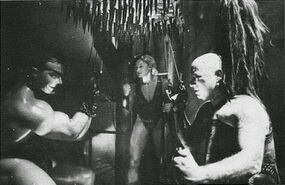 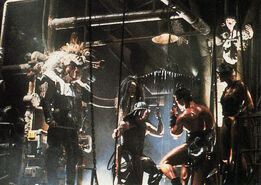 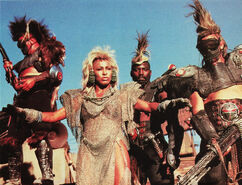 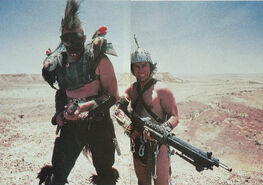