The Bones Buggy is a custom vehicle seen in the final chase scenes of Mad Max: Beyond Thunderdome.

Little is known about the chassis and the engine of this vehicle. It appears to have a V8 engine with a supercharger and two air filters on top. The vehicle is right hand drive. The body of the vehicle resembles a bone-like structure or a beetlebug shape. In the back it has two large methane tanks. It has large BFGoodrich Radial All-Terrain T/A tyres in the back and POS-A-Traction Torque Twister tyres in the front. It is a two seater vehicle.

The vehicle first briefly appears in the Underworld garage, but is fully displayed during the chase after the train-truck near the end of the movie. The vehicle does not play any prominent role on the screen and is mainly used as a background vehicle.

The vehicle was put in storage from 1985 to 1994 and was ordered to be destroyed by the production company along with the rest of Mad Max: Beyond Thunderdome vehicles. 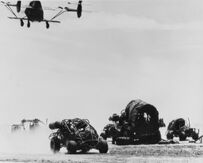 Add a photo to this gallery
Retrieved from "https://madmax.fandom.com/wiki/Bones_Buggy?oldid=17487"
Community content is available under CC-BY-SA unless otherwise noted.