"The Nux Car" is a highly modified 1934 Chevrolet 5 Window Coupe.

The first concept of Nux's car was conceived in 1997 by Breandan McCarthy and it was not in any way reminiscent of the vehicle seen in the final movie, but rather general concept design made to simply serve its purpose - carry Max at the front with Slit in the back. Shortly after Peter Pound - main vehicle designer - proposed a Ford 1932 "Deuce" as the base vehicle and so the evolution of this design had begun. 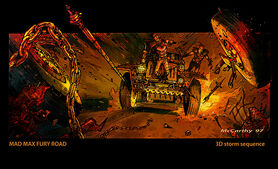 First version of Nux's car by Brendan McCarthy, circa 1997 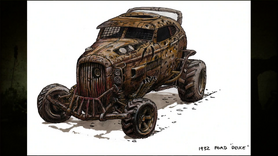 Peter Pound's initial design of Nux's car, this time a Ford Deuce 1932.
Add a photo to this gallery

Peter Pound's updated concept art from 2001 revealed this vehicle being a 1932 Ford Deuce Coupe with modifications leaning more towards the design seen in the movie with the cross at the front, basket in the back and also an additional external seat, presumably for Slit. The 2010 revision revealed a change to 1934 Chevrolet Coupe. 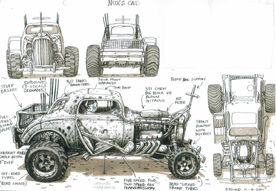 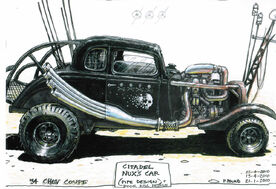 The 2010 design by Peter Pound was almost the final version with only minor differences to the ultimate design in the movie. The main difference was the paint job. The vehicle was designed to be covered in black pitch with a skull motiff on the side. This design was even built and tested before filming. Somewhere along the design and production proces of Nux's car it was decided to abandon the pitch in favor of bare metal finish. A transitional version of that design was photographed in a photo-shoot and it shows the car in bare metal but still with the skull on the doors. Ultimately, the car was removed of any kind of motifs from the doors and given plain bare metal finish. 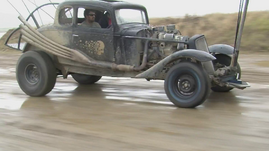 Black pitch version of Nux's car with a skull motif on the door tested in Broken Hill. 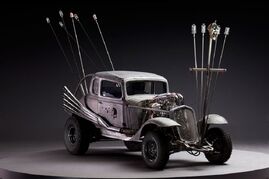 Transitional version of Nux's car, bare metal with skull design on the door.
Add a photo to this gallery

Four "Nux" vehicles were built for the movie, two of them with fully finished hand-built interiors.[2] The donor cars were stripped of all paint and for a brief time were covered in black pitch with an additional skull design on the door. Pitch was later abandoned and the vehicle was ground to bare metal, removing the skull design as well. The engine was replaced with a 350 Chevrolet V8[3] In the movie, it is connected to two turbochargers feeding into the supercharger. That setup was non functional. The vehicle was also equipped with a set of Cooper STT off-road tyres.[4] Peculiarly, Nux's car is capable of driving in reverse at fast speeds (a special version of this vehicle was built specifically for that purpose[5]). The lower section of the door was cut and welded to the chassis shortening the door height, and angle the rear of the door up allowing them to open over the massive exhaust piping on both sides.

The cabin itself is highly customised by the driver - Nux. The brake pedal has his name welded onto it, the steering wheel has a decorated doll's head representing the death and rebirth of the old world.[6] A metal crow bobblehead is installed on the dashboard and roof is decorated with Immortan Joe's logo. There are human ears hanging behind left rear window. The gear shift is decorated with dentures to reflect the notion of "Fanging it" i.e. speeding up. The handbrake has a glass eye knob. The cabin also has a functional sunroof. The vehicle has a crude Nitrous Oxide system engaged with a crank valve. The fuel lines can be easily detached and allow for flooding the vehicle. A can of chrome spray paint and a flare can be found inside.

In the front of the vehicle there is a cross to which an unfortunate victim can be strapped and used as a "blood bag" with IV tubing running through the chain from the victim to the driver, providing him with a steady stream of blood, often with a hefty dose of adrenaline.

Both the front and the rear of the car have numerous thundersticks used for throwing at other vehicles by the car's "lancer" (i.e. Slit).

Nux takes his vehicle into battle after hearing war drums and seeing Slit taking the wheel to his vehicle. Max is strapped to the front of the car and taken onto the road. Nux eventually gets close enough to Furiosa in her War Rig only to sustain damage and be rammed by The War Rig.

The Nux Car side profile

The Nux Car side

Ears hanging in the back of the car.

Notice the brake pedal of his car.
Add a photo to this gallery

Retrieved from "https://madmax.fandom.com/wiki/Chevrolet_5_Window_Coupe_1934_%22The_Nux_Car%22?oldid=16230"
Community content is available under CC-BY-SA unless otherwise noted.