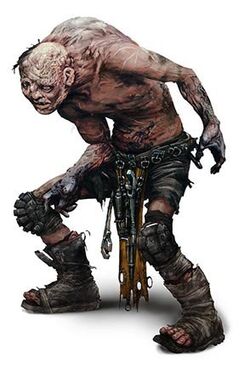 Before meeting Max, Chumbucket was a blackfinger[1], a term used to describe those who have an innate understanding of how engines and other mechanical devices work similar to the term grease monkey in the United States. He was working with other mechanics in the engine bays in Gastown, repairing all of the war vehicles for parties that go out and scout the Wasteland for resources. After having a dream he became religiously obsessed with building his Magnum Opus - the fastest, most powerful car in The Wasteland.

He started pilfering from the engine bays, hiding items for his vehicle in his little bunk. His obsession has caused him plenty of trouble. One day he was found out and would have been killed if it weren't for his executioners that wanted to toy with him beforehand. He took advantage of the situation and escaped Gas Town. Chumbucket has since been living in the Wasteland as a wandering artisan of sorts. Being an extremely skilled mechanic, he has built a reputation for himself having made contacts with the nearby chieftains known as Jeet and Gutgash.  Even though he’s a bit of a bizarre hermit, people will need him every now and then, so they don’t kill him. He owns a makeshift garage inside of an abandoned ship in a region known as The Outer graves.

In the events of Mad Max, Chumbucket witnessed Max from afar during a road war with Scabrous Scrotus. After the fierce fight, Max's car had been stolen and he was left for dead. Chumbucket, in his religious obsession, immediately concluded that his prayers to "The Angel of Combustion" have been answered and he's been sent a "Saint", a sacred warrior that will help him in building the ultimate machine of the Wastelands - the Magnum Opus. Thus he helped Max and an unlikely alliance was born.

SPOILER ALERT: He possessed an undying loyalty towards the Magnum Opus, even to his death. Immediately prior to his death, Max was involved in an unfair fight against Scrotus' personal vehicle, the Land Mover, during which the Magnum Opus was crippled and the Land Mover was rammed onto the precipice of a cliff. Max planned to destroy the Land Mover once and for all by giving it one last ram. Chumbucket told Max that he could fix it; however, Max advised him to get off the Magnum Opus. Chumbucket then realised what Max was going to do and clung to the Magnum Opus, pleading with Max not to destroy it. Driven by rage, Max drove the Magnum Opus into the Land Mover anyway, bailing out at the last moment. Chumbucket remained on the hood and was crushed and grievously wounded in the collision, then incinerated by flames caused by leaking fuel. The wreckage of the Magnum Opus and Land Mover fell off the cliff together, with Chumbucket's fate sealed. Even this last act of vengeance, murder, and sacrifice ultimately accounted for nothing, for Scabrous Scrotus escaped the wreckage with Max's own Interceptor and attempted to kill Max with the vehicle in an unfair fight, the voices of Hope and Glory giving Max the strength to win.

"Valve allow the life inside the other gives birth... struck ablaze by godly plug igniter! Revolution about revolution rejoice!

"Come and see, come and see, O Saint. The dream, the hallucination become truth! The Angel made steel!

"By the fire that moves the piston, by the tranny on all-high! By the cam and U-joint, blessed be... There she lies... The Magnum Opus!

"No! She's knowledge from the Numinous, divinely inspired. She wills herself upon this world. Look! See, here! Divine meets Driveshaft in a symbiosis of faith! Modded and made to measure! You want some of that old-time religion. We got a classic Whammy Turbo Hi-Dawg. Hell, yeah! Bullet-proof, torture tested. Ecstatically upgraded with Chumbucket Overdrive! Coils, springs, shocks and links too.

"With these hands, and the blessings of the sacred solenoid, she's come to life. My Sweet Angel Combustion...

"Eight is the magic number! You and me, we're gonna land a Big Chief! A bona fide bad boy, 429 cubic inches, 460 horses holy rollin'! Nobody could touch you on the blacktop, day or night! You'd be evergreen, eternal, road-trippin' with the Gods!

"Cam and piston! We must make our presence felt!

"Bring it forward, to the altar of this lowly acolyte! There she is! I pinch my skin yet remain awake! The Big Chief!!!

Retrieved from "https://madmax.fandom.com/wiki/Chumbucket?oldid=20852"
Community content is available under CC-BY-SA unless otherwise noted.