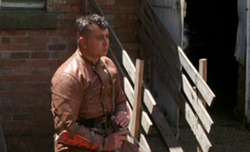 Clunk was a member of Toecutter's motorcycle gang. He was portrayed by Bertrand Cadart in Mad Max.

In his former life, Clunk was a well-known and respected brain surgeon and also an avid motorcyclist. One day he fell off his motorbike riding without a helmet and hit his head against a gutter, badly fracturing his skull. A metal plate was installed in his skull fixing the physical damage but there was another effect of the accident that could not be fixed: brain damage.

Clunk lost a great majority of his intellectual and mental abilities which became those of a 4 year old.

In result he became intellectually defenseless despite his physical bulk. He did not join the Toecutter gang as much as the gang took him in to protect him. He is the 'village idiot' in the gang, however he is treated like a younger sibling treated with great affinity.[1]

For all intents and purposes, Clunk is a 4 year old boy in a grown man's body. He is constantly dumbfounded and happy with what he sees and hears without any comprehension of what's really going on around him. He would put store mannequins on his bike riding pillion as his girlfriends to mimic other gang members riding with women. Obviously, unlike other gang members, he had no libido left.

It is unclear how he obtained his gang tattoo that is clearly visible on his left cheek, even though to get the tattoo one must kill a person. His face is clean shaven and his outfit is quite classical and straight - full clean leathers - which is a remnant of his former life as a well respected surgeon.

Clunk got his nickname from other members who called him 'Clunko' because they used to bang the metal plate screwed on his skull with various objects, spoons, pocket knives etc. His head would make the 'clunk' sound which became his nickname.

Clunk took part in one notable vehicular heist with his other gang members. In a calculative and stealthy operation, Clunk stole a large amount of of petrol from a fuel tanker for Toecutter. His role in the theft was to drive in front of the tanker to slow its approach, letting remaining members siphon off its fuel. In the final chase between Max Rockatansky and Toecutter's gang, he is ran off of the bridge along with Mudguts, making his fate uncertain.

Retrieved from "https://madmax.fandom.com/wiki/Clunk?oldid=19307"
Community content is available under CC-BY-SA unless otherwise noted.