The Mad Max Wiki
Register
Don't have an account?
Sign In
Advertisement
in: Article stubs, Characters, Antagonists,
and 4 more
English

Coma-Doof Warrior (also known as The Doof Warrior) is a blind guitarist who was part of Immortan Joe's militia, riding and playing a flame-throwing electric guitar upon the Doof Wagon. He is portrayed by Australian musician iOTA and appears in Mad Max: Fury Road.

"Leading us into battle was Coma The Doof Warrior. Blind since birth. Coma wore a mask made from the dried skin of his murdered mother's screaming face. His fire breathing weapon played the music of mayhem, It whipped us into a bloody battle rage"

There are two different back stories for Coma. George's version was Coma lived in an abandoned mine with his mother. He survived eating rodents and drinking water from the sea bed. Immortan Joe came past the mine one day and heard Coma playing guitar. He was taken in and from there rose to the position of bugler, calling everyone to war.

Iota later expanded on that: he was a child musical prodigy brought up in a happy environment by his mother, who was a musician herself. Then Coma and his mother were attacked. His mother was dragged away and days later someone dropped her head in Coma's lap. Immortan Joe found Coma clinging to the head of his mother. Joe took him in. There are two different stories about the origin of his mask. The first story notes that Coma made a mask from his mother's face, which he sliced from her skull himself.[1] The second story differs, claiming that Immortan Joe made the mask for him, a battle singer, to "Enact Joe's revenge on the world with his mother's screaming face on."[2]

The Doof Warrior is a member of Immortan Joe's War Boys and head of the War Boy band. His name derives from Australian slang for techno rave parties, dubbed "doof parties" for their repetitive 4/4 beats.

He is missing both of his eyeballs, his skin is pale and teeth are deformed. He wears a mask over his head made of his mother's face. His role is to both relay Immortan Joe's orders to everyone through sound and encourage the armada to go into battle. Despite the chaotic surroundings of battle, The Doof Warrior does not cease playing his guitar. 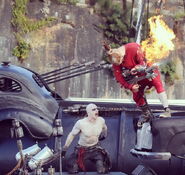 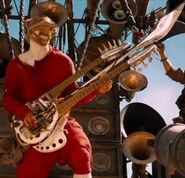 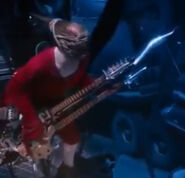 This article is a stub. You can help The Mad Max Wiki by expanding it.