"The high-speed outrider of The War Rig convoy"[1]

The original vehicle was built by Ian "Elvis" Davis from Rod Bods Downunder.[2][3] In 2008 Ian came up with the idea of installing a V12 Twin Six GMC 702 Cubic Inch Petrol Motor on an extended chassis of a 1932 3 window Ford Coupe.

The body was a Rod Bods chopped three-window coupe with exposed hinges and door handles. Rod Bods handled all of the bodywork and laid on the DeBeers Wine Red paint. The inside, including roof lining and late-model BMW seats, was swathed in black leather by Trik Trim. Half a dozen Dolphin gauges keep an eye on things while a Lokar shifter swaps cogs in the beefed-up Turbo 400. A Limeworks column and modern Banjo wheel keep everything on the straight and narrow.

The massive engine on "Elvis" car was originally a V12 Twin Six GMC 702 Cubic Inch (11.5 liter) Petrol Motor usually found in trucks and often mistaken for two V6s welded together.[4] It is its own separate engine design, however, based on a single casting. It used four separate exhaust manifolds, two separate carburetors, two separate distributor caps driven by a single distributor drive and other parts from the 351.[5] 56 major parts are interchangeable between the Twin-Six and the other GMC V-6 engines to provide greater parts availability and standardization. It produced 250 net SAE horsepower (190 kW). Torque was 585 lb·ft (793 N·m).

Ian Davis completely rebuilt the engine in order to increase its power. The engine originally had an oil governor to restrict revs to 2400rpm. Ian replaced the stock oil pump with Moroso external pump.

"It’s still a wet sump but we modified a Holden red motor pick-up that bolts on where the pump used to go. I used the holes where the external cartridge oil filter went and it was quite easy to make a plate with fittings on it. It was a simple thing to do but nutting it out took some time." - Ian "Elvis" Davis

With the lack of oil governor the revs increased to 4500rpm with an estimated 630lb-ft of torque. The fuel economy was very poor, however. The engine being fueled by petrol would get only a couple of kilometers per liter. The engine itself weighed 1485lb [675kg], while the finished car weighed 1740kg - about as much as a Ford Falcon. The engine sucked air in through two 350 Holley two-barrel carburetors with hot rod style intake manifolds.

The engine had two radiators cooling it down. The weight of the water itself forced Ian to install additional spring leafs to keep the car from dropping to the ground.

Shortly after the original hot rod was built in 2009 the production company for Mad Max: Fury Road purchased the vehicle. Ian "Elvis" Davis wouldn't let the production to ruin such a perfect car in the sands of Namibia, so instead he stripped the vehicle of its body, interior, wheels, the grille, the headlights and all the valuable parts. He replaced the body of the car with a fiberglass body, which was later painted to look rusty since fiberglass does not rust. New basic wheels were fitted along with a bucket seat and after additional modifications by the movie's production team - most notably a heavy duty machine gun mounted on the roof, the vehicle was ready to perform in front of the camera. The original parts were used for building a new hot rod fitted with a small block Chevrolet engine.

Three quarters into the filming, during the sound recording stage the sound effects crew demanded the engine of "Elvis" to be pushed to the limit which caused the V12 to break the crank, which rendered the engine useless. The production crew used a fiberglass engine mould and hid a 350/290hp Chevrolet Small Block V8 engine under the 'fake' fiberglass cover. The original V12 was bought back by Ian Davis.

The chassis and the body for a second 'Elvis' - stunt car - was build by Ian and his company. That vehicle obviously could not be fitted in with a V12 engine, so instead a mould of the V12 was made and from that a fiberglass dummy motor cover was created which was put on top of a 1.3 liter Toyota Corolla engine. The stunt car was destroyed after performing its duty.

The vehicle is first seen during the convoy assembly in The Citadel and later it's shown guiding the War Rig through The Last Road. The vehicle goes off-road along with The War Rig and is later ordered to attack the oncoming Buzzards. It falls into a trap, catapulting its gunner across the air. The wreckage of this vehicle is later seen travelling across the wasteland on a car carrier hauled by a Mack truck.

The hero car was used for promotional purposes at the Sydney Opera House Mad Max: Fury Road premiere and has since been locked away in storage.

In the video game

There's a vehicle in the 2015 video game which has almost the same design as the Elvis, just with longer exahust pipes, a golden body and missing a machine gun, it is named "The Twelve" and like the Elvis, it has a V12 engine which is also mistaken for two V6s. It can be found inside a tunnel where Hope's first mission takes place, where Max can also find a wrecked War Rig, the maximum mag Sniper Rifle upgrade and Humungus's Mask (DLC). It is the fastest vehicle in the game, but very fragile and difficult to control. 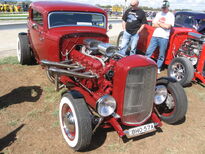 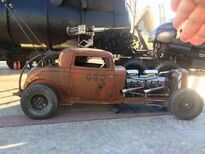 At the Sydney Opera House premiere 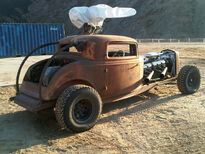 Elvis being carried in a chase scene.