The script for Fury Road required once again for the iconic V8 Interceptor to be destroyed and from its ashes "Razor Cola" was born. Stripped to bare metal and equipped with twin superchargers the vehicle was most notably utilized by Slit in the final chase scenes of Fury Road.

The name "Razor Cola" seems to fit inside Immortan Joe's made up dialect where "Cola" is added to certain words i.e. "Aqua Cola". Originally, however, the name "Razor Cola" was reserved for one of Bullet Farm's henchmen, as displayed in early artwork by Peter Pound.

Razor Cola Character
Add a photo to this gallery

In order to build the Razor Cola two Ford Falcon Coupe's were bought by the movie's production company.

Australian Restoration company RestoPrep Australia[1] was commissioned to sandblast vehicles for the movie and they also provided the vehicles which would be later turned into Razor Cola.

The first vehicle (Razor Cola #1) was a black Ford Falcon XC Coupe retrofitted with XB panels and an XB GT hardtop motor.[2] It was originally RestoPrep's owners very own drag car that was modified years before the movie went into production.[3] The vehicle was then sandblasted to bare metal and used as a display vehicle for Cameron Manewell's automotive blasting business. It was resting in RestoPrep's workshop until one of the buyers for Fury Road, Laurie Faen, came in to Cameron interested in buying one of many hardtops Cameron was in possession. The bare metal look of the display car caught Laurie's attention and the car was sold to star in Fury Road.

Razor Cola #1 as a drag car, before sandblasting

Razor Cola #1 back, still with paint

Razor Cola #1 after sandblasting, on display

Razor Cola #1 after sandblasting, presented as a display car for RestoPrep Australia
Add a photo to this gallery

The shell of the second car was again provided by RestoPrep's owner, Cameron Manewell. The XB Fairmont 302 hardtop shell was originally planned for a future Mad Max replica. The shell was rusty with an aftermarket sunroof and badly dented quarter panels. After extensive repairs it became the basis for the duplicate Razor Cola, aka Razor Cola #2.

Razor Cola #2 After Sandblasting, Side

Razor Cola #2 Rust
Add a photo to this gallery

Cameron Manewell was then offered a job working on the 'muscle cars' in Fury Road including three V8 Interceptors, two Valiant Chargers, US Charger, a silver Mini and two Razor Colas.[4] The two cars destined to become Razor Colas were delivered to the Villawood workshop and parked alongside the three other hardtops used in the film as the V8 Interceptor. 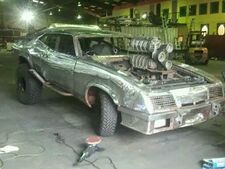 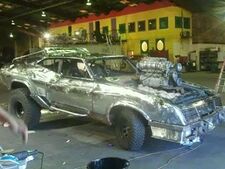 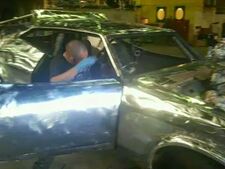 Razor Cola Preproduction 3
Add a photo to this gallery

The steel body kit for the vehicles was a work of skilled metal fabricators / panel beaters Mark Natoli and Paul Nolan. Both cars were fitted with Cleveland engines and shift-kitted automatic transmissions. The blower switch is identical to the original Interceptor, but its position was changed to the back of the shifter mechanism after some concerns about the safety from the stuntmen. Both cars have a set of stacked superchargers, which are non functional in reality as they are mounted above the air cleaners onto a frame that was bolted to the heads, but both are belt driven by the engine. The two superchargers are 6v71 & 6v53, essentially the same as the original Interceptor. The scott injector hat is decorated with a skull with metal teeth. The bonnet had to be put over the superchargers from the top, then it was pinned to the car. The vehicle was lifted in the front and in the back, with Ford F-100 9-inch differential. The spring pad spacing was identical to the Falcon except the pads were on top of the differential instead of under. This gave the car both the desired height increase as well as widening the rear wheel track. 37 x 12.5 x 15" off road tires were installed and had to be fitted into a modified set of wheel arches (stretched about 4-5" in the middle) with flares originally designed by Scott Smith. Additional bars in the back and under the doors were added. The Concorde front end was fabricated in metal with barbwire headlight covers. Both Razor Colas were almost entirely made of steel and once they were structurally complete, they were handed to the scenic artists to finish the sanding and clear-coating to make both cars look uniform and identical. Originally, both Razor Colas were supposed to be half black to help the audience associate the car with the Interceptor. This design existed around the time of planned filming in Broken Hill, but after the delay, the vehicles were completely ground to bare metal, as the vehicle looked familiar enough for the audiences either way. Due to the change in design, the rear fiberglass flares had to be changed as well. Finally, the cars were turned over to set dressers and weapons team for final detail work and to fabricate the working spike dropper on the rear.

The interior was stripped to bare minimum, new dashboard was fabricated, a racing seat for the driver was installed along with an old and tired Falcon passenger seat. The steering wheel was decorated with a skull, a nitrious oxide system tank (non functional) can be found inside, the rollcage was wrapped in strips of tires.

After Max's V8 Interceptor gets run down on The Powder Lakes, it is then hauled by a Mack Truck back into The Citadel to be rebuilt as Razor Cola. It does not take long for the mechanics of The Citadel to completely modify this vehicle and as soon as word gets around that Furiosa escaped, Razor Cola joins Immortan Joe's vehicular chase in pursuit. During the chase Max notices his modified V8 Interceptor and screams in dismay that they have taken everything from him.

At first it is driven by unknown War Boys, but later, Slit get onto this vehicle and tries to outrun the War Rig by spitting fuel into Razor Cola's injector hat. Again, Max claims that this vehicle is in fact his as he tries to shoot Slit hiding behind twin superchargers. The vehicle's driver is then taken out and Slit takes the wheel from then on. Eventually he catches up with the War Rig and attempts to kill Max with his own car. Unfortunately his plan is foiled as he is sandwiched between The War Rig and People Eater's Limousine Rig. The car flips on its side, gets crushed by the two rigs and explodes with Slit screaming "Valhalla" for the first and last time.

After the production, the XC Razor Cola #1 was left destroyed. The vehicle was then shortly offered for sale, but without any takers it was crushed. 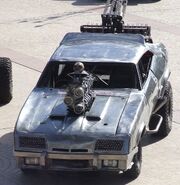 Razor Cola #2 at the Sydney Event

Retrieved from "https://madmax.fandom.com/wiki/Ford_Falcon_XB_GT_Coupe_1973_%22Razor_Cola%22_aka_%22Caltrop_no.6%22?oldid=19688"
Community content is available under CC-BY-SA unless otherwise noted.