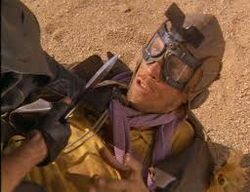 The Gyro Captain was a scavenging autogyro pilot who roamed The Wasteland. He was portrayed by Bruce Spence in Mad Max 2.

Max Rockatansky first met the Gyro Captain while searching his autogyro for gasoline. The Captain had set a clever trap and was going to take everything Max owned, that was until Max's dog attacked him.

The Captain told Max about the Oil Refinery in exchange for his life, and Max took him prisoner. The captain was chained up inside Max's car, and a shotgun was rigged to shoot him should Max's dog pull on a string tied to the bone in its mouth. They arrived and set up an observation post on a nearby hilltop, watching the battle below. Max chained the Captain to a tree stump and ate some canned dog food in front of the him, later tossing him the nearly empty can. When the gyro captain finished the dog food he politely wiped his face with a napkin. Showing that in this future madness there is still some civility left in some people.

Once Max made his way into the compound, the Pilot was left on the hilltop to fend for himself. Max, tasked with bringing back the Mack truck, later found the Captain dragging the still chained treestump behind him. Together they took the Gyro to the truck and brought it back to the compound.

The Captain begged Max to stick together, insisting that they made a great team. Max, however, declined his offer. After Max left the compound, his bargain completed, the Gyro Captain saw the smoke from his car crash, and went to rescue him, eventually bringing him back to the compound.

Unbidden, he later provided aerial support when Max drove the rig to the Oil Refinery compound.

After Papagallo's death and the fleeing of the tribe to the north, the Captain became leader of the tribe. He never saw Max again.

The Gyro Captain is a well-trained pilot of the autogyro (or gyrocopter) and uses it to navigate The Wasteland. With his telescope and airborne vehicle, The Captain knows the land very well, and had made a reference of numerous key locations surrounding him.

He is also an adept snake handler, and has in his possession several trained snakes. The Captain is also a cunning strategist, and had used his snakes to set traps for other wastelanders by placing them over what looked to be an abandoned gyro.

The Captain comes across, like many in the Wasteland, as somewhat crazed, seeming to enjoy the action of the wastes. That being said, inhumane acts, like witnessing a rape of one of Papagello's people by the marauders, horrified him.

Retrieved from "https://madmax.fandom.com/wiki/Gyro_Captain?oldid=20983"
Community content is available under CC-BY-SA unless otherwise noted.