The "Gyrocopter" flown by the Gyro Captain in Mad Max 2 is a single-seat Auto-Rotating ultralight/experimental design aircraft. They are a highly-maneuverable, medium-speed (~100mph/160km/hr) and often home-built recreational flying machine.

The type used in Mad Max 2 is of the "Bensen" open-frame design. It is powered by a modified volkswagon flat-4 cylinder engine with a direct-driven propeller. It has a single seat with no surrounding cockpit giving the pilot an unparalleled view in all directions, compared to most aircraft where anything directly beneath them is not visible. This visibility makes it a great "ground attack" machine which the Gyrocaptain uses to drop snakes and petrol-bombs on people from above.

It is not a helicopter, because the main rotors are not powered by the engine. The engine turns a propeller on the rear, which pushes the aircraft forwards (which is why it could drive along the road at the end of the Road Warrior, even with the top Rotor wrecked), and the Main top rotors "freewheel" (Auto-rotate) in the air stream. Consequently, it cannot "hover" like a helicopter, and must keep moving forward through the air to remain aloft (like an airplane). It is the reason we see the Gyro Captain "winding up the rotors by hand" prior to flight in Mad Max 2. The rotors are often hand-started spinning to minimize the distance the Gyrocopter has to taxi along the ground before the rotors are spinning fast enough to actually take off.

The maneuverability of the Gyrocopter is amazing, they can "turn on a dime", slow down to a near-stop, speed up to over 160km/h, perform "High-G" turns, flat-spins, spiral-dives, land in a tiny space, and be literally flown in and around trees in a manner no fixed wing aircraft can emulate. They are also very cheap to operate, costing less than 1/10th of a helicopter to buy and maintain. This makes them very popular with cattle-musterers in Australia, where they often serve as a kind of "flying motorcycle" for rounding up cattle scattered over wide areas.

Gyrocopters have a wide variety of names. The very first "Auto-rotating" rotor-equipped aeroplane invention was called an "AutoGiro" since its inventor (Juan De-la Cierva) was Spanish. This became "AutoGyro" in English. Nearly all of these historic types resemble a regular winged aeroplane with a rotor added on top and are "Tractor" configurations - where the engine+propellor (not the rotor) is mounted out in front and *pulls the aircraft through the air. In the 1960's, Igor Bensen built a variant that looked nothing like an aeroplane (it had no wings or fuselage), but was more like an open-cockpit lawn chair hanging underneath the Rotors, with the engine and propellor mounted behind the pilot in a "pusher" configuration rather than the "tractor" pull style. He called his machine a "Gyrocopter". Most home-built single-passenger pusher-style machines closely resemble Bensens open-chair design and are most correctly called "Gyrocopters" as a result. This is also the ICAO (International Civil Aviation Organization) definition. Some people prefer to use the generic terms - GyroPlanes, AutoGyros or simply Rotorcraft. All these terms are also technically correct, but the machine in Mad Max is of the open-frame-pusher Bensen design, and so is best called a GyroCopter (often abbreviated to simply "Gyro").

This machine is first seen right after the opening scenes of Mad Max 2: The Road Warrior with Max spotting it in the outback and trying to scavenge it for fuel. The vehicle appears to be abandoned with a snake on the rear propeller. It turns out to be a trap set up by the Gyrocaptain.

Max later returns with chained Gyrocaptain to the Gyro and both take it to the the abandoned Mack truck. After Gyrocaptain is free after helping Max he follows him in his vehicle and helps him fend off marauders on his way to The Compound. The Gyrocopter finally lands inside the compound to the astonishment of its occupants whom most likely had never seen a machine like that before, that includes a very curious Feral Kid who's mostly interested in the rear propeller of the Gyrocopter that seems to remind him of his own boomerang.

Max fulfills his contract and leaves the Compound into 'heaps of trouble'. He is run off the road and his car self-destructs. Gyrocaptain comes in to save Max and both take off back again into the Compound aboard the Gyrocopter.

The Gyrocaptain decides to help Max yet again in his tanker escape and he proves to be quite a target for the marauders. Humungus fires his final remaining bullets at the Mack truck and the Gyrocopter, recognizing them as the most important targets. The Gyrocaptain observes the chase for a long time until he petrol-bombs Humungus setting him ablaze and bringing him to a stop. The Gyrocopter is promptly shot down by the shooter of the F-100 Cobra truck. The main rotors are damaged in the crash and from then on the Gyrocopter cannot fly but can only roll on the ground instead. The Gyrocaptain catches up with Max after he crashed the tanker and takes the Feral Kid with him on his journey back to meet with the rest of people who escaped the Compound.

Two Gyrocopters were made for the movie. One for the close-up shots, fully prepped with nude pictures on the rear stabiliser fin, a triangle-shaped padded seat and an electric motor spinning the rotor for 'flying' scenes. For those scenes, actor Bruce Spence would sit in the Gyrocopter that was mounted on a frame that allowed for camera shots from underneath the Gyro. This mock-up aircraft was dropped from a crane for its crash scene and scrapped afterwards. The only remaining element that survived was the rear propeller which was donated to the Mad Max Museum.

The second Gyrocopter was fully functional, with a different, bare aluminium seat and lack of pictures on the rear wings which were instead spray painted to roughly resemble shapes seen on the other Gyrocopter. The actual flying in Mad Max 2 was done by an Australian pilot and builder of Gyrocopter parts called "Gerry Goodwin", since it takes quite a bit of training to learn to fly a Gyrocopter safely, and Bruce Spence (the Gyrocaptain) wasn't qualified to do so.

After Mad Max 2, the Gyrocopter was sold on an auction and actually flown for a number of years. After many repairs the Gyro ceased to exist as it was seen in the film. On November 21st 2015 it was announced on the official Mad Max Museum Facebook Page that the Gyro had been found in the hands of Tim McClure. With his permission, Mad Max Museum owner Adrian Bennett along with Terry Fletcher restored the Gyrocopter and put it on display at the museum. The restored machine still has its original engine.[1] 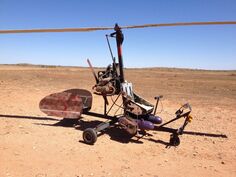 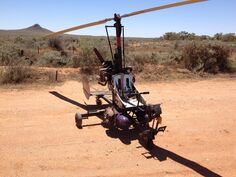 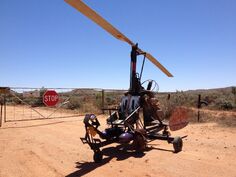 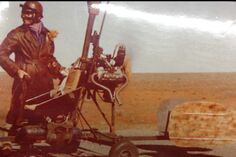 Gerry Goodwin, the actual Gyrocaptain piloting the Gyro on set of Mad Max 2 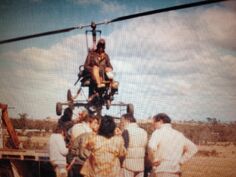 Bruce Spence in a close-up Gyrocopter mounted on a frame. 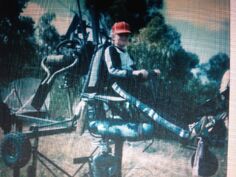 The close-up Gyrocopter with its motor and pulley system.