The vehicle is a modified Howe and Howe Ripsaw EV1 "Extreme Vehicle 1" with a Valiant Charger body.

In 2009 Colin Gibson contacted Geoff and Mike Howe of Howe and Howe Technologies on behalf of Miller Kennedy Mitchell production company. George Miller ordered a vehicle from H&H that would be essentially a fast track vehicle capable of driving in rough terrain and unforgiving weather conditions. H&H decided to use their EV1 Ripsaw chassis for this project, however the original design was modified by the requirements of the movie production company.[1] The reason for changes was the reduced price of the vehicle: H&H quoted USD 250,000.00 but Colin Gibson insisted on USD 120,000.00. H&H agreed under the condition that the vehicle would be delivered without clutch packs and would be equipped with brake steering instead. Additionally the EV1 Ripsaws were usually equipped with diesel or small engines, but Colin required the vehicle to have a supercharged V8. Building the vehicle took 4 months and rigorous testing in the US before the vehicle was shipped to Australia where it arrived halfway through the build of other vehicles and it was later modified and then shipped to Namibia. The vehicle, however turned out to be problematic.

Originally the Ripsaw came with a watercooled Merlin V8 engine. Upon arriving in Australia the vehicle was tested on a 1km track, but the engine overheated and the brakes caught on fire. The exhaust pipes were 6 inches long which made the engine extremely loud even with hearing protection on.[2][3]

The movie's main mechanic - Mark McKinley - tackled the braking system. As it turned out the brakes gave 100lb of pressure all the time which made the vehicle take off 'like a boat', but the reason they initially caught on fire was a 10k ohm potentiometer on the steering wheel and the brakes pedal.

Eventually he tamed the beast with adjustable pressure valves in the hydraulic lines so it would not drag its brakes any more.[4] Not only the brakes were rewired but the air filters were replaced and additional 3rd radiator was installed in the back.

During testing in Broken Hill the vehicle was not responsive enough and it also swallowed a lot of sand. Due to dirt getting past the air filters the engine was damaged and cylinders had to be re-honed. Also during testing the track guild wheel was lost which went into the track and bent the differential. After replacing the wheel, straightening the differential and removing the track assemblies the team discovered that they were half welded only the exposed sections. That issue had to be fixed at Alexandria.

After testing the vehicle was shipped to Namibia where the engine was again replaced. The Merlin V8 swallowed a lot of sand and it had to be replaced with a smaller 502 Chevrolet engine. An electric water pump was installed, Ford Falcon's single core radiators and Falcon double fans as well as EWS water pump fan controller. A secondary battery was added along with Anderson plug. The vehicle was fitted with new tracks which only lasted a month before they broke. The cost of tracks was estimated at USD 18,000.00. A special diesel bath was made to try and keep the salt out of the tracks.

The Ripsaw's body is of a mid-70's Chrysler Valiant Charger stretched and modified to fit over the tank chassis. Leftover Cessna sections are bolted up front, the grille is filled with bullet 'teeth'. There is a hole in the roof which allows for The Bullet Farmer to to sit atop and operate the searchlight. There is also space for his two henchmen in the back. The driver of the vehicle sits in the engine bay of the Valiant Charger shell. The driver had to be buried deep inside the vehicle which made it very difficult to see anything except straight ahead. The tracks had to be covered to protect the driver from the sand and dirt.

The Peacemaker is first visible arriving at the blocked passage with disgruntled Bullet Farmer on board. After removing the blockade, the vehicle continues the chase until all vehicles get stuck in the bog. The Peacemaker, being the only vehicle capable of crossing the bog leaves the halted armada and continues to track down The War Rig. Soon enough a bullet from Furiosa's sniper rifle shoots out the searchlight in The Peacemaker, which blinds The Bullet Farmer and enrages him even further. Shortly after The Peacemaker is destroyed and its crew killed at the hands of Max himself.

The vehicle was highly regarded as the most dangerous vehicle on set. Its problems with braking, custom design and engine forced the crew to refine it greatly to perform on screen. The vehicle was destroyed in Namibia.

"Even though I hated the Rip Saw, it was sad watching them get crushed and coming out as cubes" - Mark McKinley [5]

Adrian Bennett, owner of the Mad Max Museum in NSW inside The Peacemaker during its production in Australia

Adrian Bennett inside The Peacemaker

The Peacemaker side, notice the stretched front. 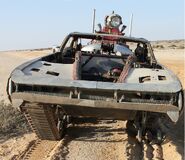