The Mad Max Wiki
Register
Don't have an account?
Sign In
Advertisement
in: Films, Characters, Antagonists,
and 4 more
English

Colonel Joe Moore, better known as Immortan Joe, is the primary antagonist of Mad Max: Fury Road. He was the lord of The Citadel and the leader of the fanatical War Boys.

"One ordinary Wednesday the power was turned off and it didn't come back again. The world went beyond the tipping point (...) Those who could, left the city to a slow death. Those with muscle and ruthlessness (...) ex-jarheads, devildogs with high and tight haircuts, caches of weapons and the will to use them, men in search of something more, a vision of a new world rising from the ashes of the old world. Their leader, the militant Colonel Joe Moore..."[2]

Immortan Joe - formerly known as Colonel Joe Moore - was a veteran of the Oil Wars and a hero of the Water Wars. He formed a biker gang terrorizing the people after the fall. His gang included henchmen dubbed Major Kalashnikov and a strategist: Deepdog. With each battle the gang grew stronger by slaughtering the leaders of other gangs and taking the women. With that, his idea of bringing back society willingly took a dark turn. Eventually he and his gang entered the wasteland, where he would learn about a massive aquifer plant later known as The Citadel.

Learning about The Aquifer

Out in the wasteland, Colonel Joe Moore spotted a group of rogue MFP officers (Roop & Charlie) attacking a group of people. He sent out a war party that found a survivor (who later became the People Eater) with knowledge of the location of a massive aquifer built into a series of natural stone pillars in the wasteland, sitting on a lake of fresh water. After learning about the location of the aquifer, Colonel Joe Moore tried to bargain with its inhabitants, wanting to trade the captured women for water. His offer was turned down and his gang was attacked. He decided to look for water elsewhere.

Colonel Joe Moore sent scouts to look for water, but what they found was a derelict oil refinery and an abandoned lead mine. He also sent out disposable members of his gang to climb and inspect The Great Rock, but all of them were shot down.

Taking over The Citadel

Joe Moore, inspired by a Persian (Maratha in actuality) general Tanaji Malusare, decided to sneak into The Citadel and take it over in a similar fashion. He strapped a rope to a lizard that was going to climb up the wall and allow the gang to climb it. The lizard was reluctant to climb at first so one of the members of Moore's gang cut off his own finger and tied it to a stick hanging in front of the the lizard's head to encourage the reptile to climb up. The lizard eventually made its way up and the attackers climbed up the rope at night. The remaining gang members on the ground started an all-out assault, and while the aquifer defenders were busy shooting them from atop, a surprise attack came from the people who climbed up. As Moore's men were attacking up top, the defenders retreated to another tower and blew up the pipes connecting the towers. Moore's plan was foiled. The gang started to count losses. As they were doing so it came to their attention that there was a fight inside the main tower.

As the day went on the main tower started to burn. The gang on the ground thought someone made it inside that tower. But then they saw familiar members hung from the top one after another. On the third day the band underneath lost all faith and decided to leave. But then, Joe Moore appeared. He was immediately dubbed "Immortal man" or 'Immortan Joe' by his gang.

The harshness of that world blurred the edges of reality. People worshiped Joe like a god. Meanwhile, Joe rebuilt the aquifer into The Citadel and scoured the land for resources. He reclaimed the Oil Refinery up North and used it to produce guzzoline for his armada. Dubbed The Gas Town, it was run by the captured fat man who tipped Immortan about the location of the aquifer, and he became known as The People Eater, reckoner human calculator.

Immortan Joe refurbished the abandoned lead mine and turned it into The Bullet Farm under the rule of his former gang mate, Major Kalashikov, now known as The Bullet Farmer.

The legend of Immortan Joe captured the hearts of many, and they traveled to The Citadel to seek a better life. They were known as The Wretched or The Triumvirate, standing at the lowest in the hierarchy, occasionally allowed to drink water from Immortan Joe's supplies. Only the healthy ones were taken by Immortan to become either Milk Mothers, Treadmill Rats, War Boys or Breeders. None of them knew what fate awaited them. The young boys were forged into fanatical believers of Immortan Joe's cult, becoming mechanics, worshippers of the V8 and Immortan Joe's greatness. However, Immortan Joe was fearful of his future seeing his sons unworthy of becoming his successors. He created a 'breeding program' in order to produce a healthy successor for his empire. He sought the healthiest and purest women and called them "The Five Wives". The Wives escaped his tyranny with help of Imperator Furiosa.

Immortan Joe made himself into a divine figure for the War Boys that regard him as a god leading them to a chrome-plated afterlife in Valhalla should they impress him on the battlefield. His cult reaches out far to The Wretched who - being at the bottom of the hierarchy - flee to The Citadel to be offered water and a way into The Citadel itself if they are chosen by Immortan Himself.

Afer his trusty Imperator Furiosa betrayed him and escaped with The Five Wives, Immortan Joe commenced a chase across the wasteland to retrieve his most valuable assets. This was referred to as "The Road War" by the History Men, otherwise known as the events depicted in the movie itself - Mad Max: Fury Road.

His body was covered in sheets and delivered atop the Gigahorse back to The Citadel. Upon removing the sheets and revealing Immortan Joe's body to both the Wretched and the winchmen guarding the main elevator, his body was dropped off the vehicle and immediately torn apart by hoards of Wretched while the Gigahorse with the victorious Furiosa drove on the elevator platform and was lifted up to the Citadel.

The very first idea for the ending of Fury Road was vastly different from what was presented in the final movie.

Immortan Joe and his armada would have arrived at a huge cliff revealing that they were indeed at the edge of the land and everything below was an ocean bed engulfed in clouds. The War Rig would've drove down into the clouds because Furiosa knew the secret road leading down there while "Furies" - flying Vuvalini would've emerged up from the clouds and the final battle between The Immortan and Furies would've commenced. The outcome of that battle is unknown because this idea was scratched early on and replaced with Furiosa turning around and going back to the Citadel.

Joe is an older man of stocky build, with long white hair and piercing blue eyes. His health is failing. His back is covered in large boils. He seems to have respiratory problems but due to his rank in society, he breathes clean air through a respirator mask (decorated with horse teeth to resemble a skeletal jaw) connected to a large breathing apparatus (resembling bellows) worn on his shoulders. Joe covers himself from head to toe in white powder to ease his pain[3], giving him a ghostly pallor which is mimicked by War Boys (makeup design was inspired by Indian holy men[4]). He wears bulletproof Plexiglas armor, which is adorned with several service medals and molded to give him a muscular appearance. His elaborate costume is designed to both aid his failing body and hide it from the prying eyes of The Wretched and War Boys. It's also used as means of intimidation.

Joe displays many traits typical of cult leaders and dictators. He is a tremendous public speaker, delivering lofty speeches to elicit fealty from his subjects. He regularly demonstrates his control over The Citadel's resources, constantly reaffirming his dominion over the population. He commands a horde of fanatical warriors who worship him and follow him without question, even going so far as to sacrifice their lives for his every whim. In turn, he offers them the promise of eternal life with him in Valhalla.

Despite his totalitarian nature, Joe does seem to have a altruistic side. He sincerely believes that he is doing right by society within The Citadel: by rationing the water, growing and distributing crops, capturing "blood bags" (enslaved individuals used as blood donors) for medical use, and by implementing a "breeding program".[5]. He has a great affection for his wives but treats them as objects rather than people, referring to them as his "treasures". In the Mad Max: Fury Road comic he considers the wives ungrateful for what he apparently sincerely considers to be generosity. He seems to think his keeping the wives imprisoned as sex slaves is truly what's best for them and thinks of them as spoiled when they verbally rebel. Nonetheless, he still shows great concern for both his wives and especially his childrens well-being. He isn't so cruel as to put their safety at risk, a weakness that was exploited when his wives finally made a daring escape from his Citadel.

Joe's sexual tendencies are covered much more in the comics and are suggested to be unusual. In the presence of his wives, he refers to himself as "daddy", asking Cheedo to sit on his lap like a child and seemingly taking pleasure in the age gap between him and his wives. Toast also remarks that during one of her rapes he had penetrated her anally rather than vaginally. This suggests that while Joe does place obtaining a healthy heir as a high priority, he still to a degree uses sex with the wives just for pleasure. It's also hinted at in the comic that he may have a closeted attraction to men. The wives mock him by saying he would rather sleep with a War Boy than with them, and the History Man narrating the comic shares this sentiment. In support of this claim, Joe has in the comics been seen encouraging War Boys to refer to him as "daddy", a parallel with how he talks to his wives. He is for example seen in his own origin comic telling the War Boys "daddy loves you".

The design of Immortan Joe changed over many years of movie's development, however the only remaining characteristic present in all designs is his breathing apparatus also functioning as a menacing mask.

The Immortan himself was going to be painted blue. In early storyboard concepts the Winchmen are holding containers with blue washing detergent. That's what was being traded to give the warlord his blue color. According to Mark Sexton, the idea came about as a joke among the writers. In early storyboards The Wretched were trying to trade packs of Cold Power (a brand of laundry detergent by Colgate-Palmolive) with the Winchmen. [6] 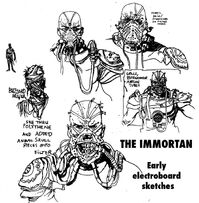 Very early sketch of of Immortan by Brendan McCarthy 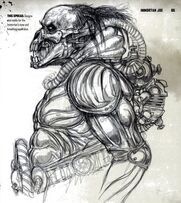 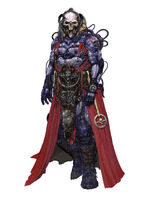 Immortan next to The Gigahorse concept