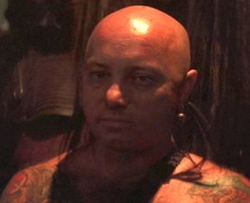 Ironbar Bassey was the head of Aunty Entity's Bartertown security force. He was portrayed by Angry Anderson in Mad Max: Beyond Thunderdome.

Ironbar was second in command to Aunty, assisting her rule of the settlement of Bartertown, implementing her commands and dispensing 'justice'. He brought Max to Auntie's watchtower and assisted in the 'audition' to test his suitability to face Blaster. In the aftermath of the Thunderdome contest when Max discovers Blaster is a mentally disabled man and refuses to kill him, Ironbar finishes the job with a hand held crossbow. Max is forced to 'face the wheel', a form of justice decided by the spinning of a wheel of fortune, it is Ironbar who presides over Max's exile in the desert wasteland, saddled and bound to a horse. Later, when Max returns to Bartertown with Savannah and the Tribe Who Leave, Ironbar gives chase, leading Aunty Entity's forces in an attempt to hunt Max down and retrieve Master.

After a lengthy battle across the desert highway, resulting in the maiming of Pig Killer and the death of several of Aunt Entity's soldiers, Ironbar is eventually killed in the crash which enables Jedediah and the Tribe Who Leave to escape, his final gesture is a blackened hand rising from the wreckage to display a one fingered salute. Max survives the crash and is spared by Aunty, only to be left alone and wandering the barren highway.

Originally, the character of Ironbar Bassey was completely different from what ended up on the screen and most of it has to do with Angry Anderson's persona. Anderson approached George Miller for role in the next Mad Max movie, much like many other entertainers and rock stars. Initially George Miller declined Anderson's proposition stating that there already is Tina Turner in the movie, 50 children and animals, so they couldn't really take on another person with no acting experience. It turned out, however that Angry Anderson did have some acting experience on a movie made by Mad Max Beyond Thunderdome's script supervisor. Miller watched that movie, which was a comedy, and Anderson turned out to be terrific in it. Angry Anderson was cast in Mad Max: Beyond Thunderdome as a character which was going in one direction, but with Angry's casting it went into another, utilizing Anderson's comedic abilities.[1]

Retrieved from "https://madmax.fandom.com/wiki/Ironbar?oldid=20897"
Community content is available under CC-BY-SA unless otherwise noted.