The Mad Max Wiki
Register
Don't have an account?
Sign In
Advertisement
in: Gangs, Groups, Antagonists,
and 3 more

Lord Humungus' Marauders were an unnamed gang of vehicular marauders that roamed the wastes of the Outback.

The Marauders were led by their menacing leader, Lord Humungus, and were one of the factions in the war for the Oil Refinery's control. They were referred to by the Lord Humungus as Dogs of War.

Humungus' marauders were comprised of several smaller groups, or castes, which he may have united together under his leadership. Possible side-line groups included: the Gayboy Berserkers, Skinheads, Punks and Smegma Crazies.

The attire of each group hints at their life before the apocalypse:

The group is mostly male, but there are females in the entirety of Marauders, however only the males are seen participating in the final chase sequence.

Group of marauders (with Bearclaw Mohawk)

Mohawkers next to their "Snake Truck"

Smegma Crazies beside a vehicle with an iron-cross decal 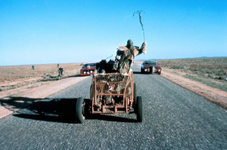 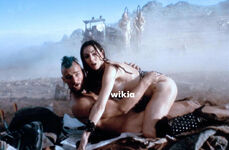 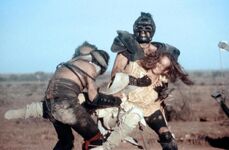