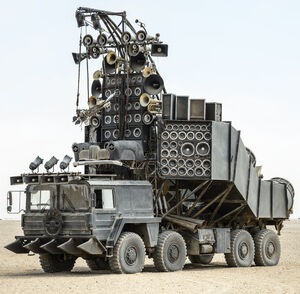 The Doof Wagon is the 'morale machine' of Immortan Joe's militia party, intended to rally the troops and keep them pumped up for battle. It is also a form of psychological warfare, allowing Joe's reputation to literally precede him into battle.

Peter Pound, one of the original designers "was a bit of a rev-head and a metal-head and he wanted to put all of his favorite things (into this vehicle).[1] Originally The Doof Wagon was based on a MAZ 543 "Uragan" ("Hurricane"), a Soviet/Belarusian 8x8 artillery truck. The cabin would have been heavily modified, but the overall design would not be too far from the finished product. The Doof Warrior was designed to be hanging on bungee cords, except in the final design his guitar also hangs from them due to its massive weight. The design of Doof Wagon evolved over the years and took a familiar shape in 2010 with a new MAN platform and other design changes. 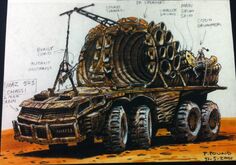 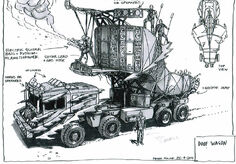 Possibly the most feverishly insane contraption of them all, Warner Brothers dubbed it a “sonic carmageddon.” This speaker-stacked, guitar-thrashed monstrosity was meant to rally the troops in the way drummers marched with soldiers in ancient battles. It has a supercharged V8 engine with a mobile stage, a wall of speakers and sub-woofers, and air conditioning ducts out of a building meant to drive home the beat of the accompanying Taiko drummers. The Doof Warrior swings from a bungee cord mounted to the front as he shreds metal while flames are thrown from a double-necked electric guitar/bass.

The vehicle is based on a MAN LKW 15 t mil gl KAT I A1 (8x8). It is a 15 ton class vehicle modified with a wider track of 2,900 mm, that serves as carrier and launcher systems of the Roland and Patriot weapon systems.The four-axle truck is powered by a Deutz 8-cylinder Diesel engine with 360 hp, turbocharger and intercooler. Like the 5-, 7- and 10-ton classes, some of the vehicles have a Rotzler winch.[2]

Building air ducts were used as sound tunnels, which amplify the sound of four massive drums. A wall of functional speakers transmits the sound from The Doof Warrior's guitar, which - along with the Doof Warrior himself - is also suspended on bungee cords. The Doof Warrior's stage is made of Holden FJ front end. The design of the guitar is built around a bedpan, which Miller loved, but he was surprised the guitar did not actually work. He ordered the design team to make the guitar functional, so real guitar pickups, strings etc. were installed, even though the actual sound of that guitar is not used in the movie and not all speakers were wired to function as well.[3] The flamethrower on the guitar is real and functional, controlled from a whammy bar.[4]