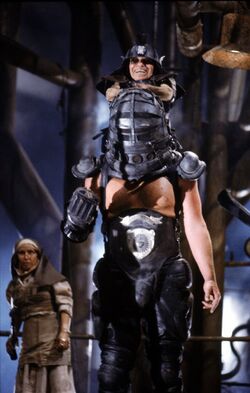 Master is the brains and Blaster is the brawn when it comes to running the massive methane power plant, Underworld, located underneath Bartertown, Master exercises his will while Blaster uses his imposing size to keep the workers in line.

The very first notion for Master Blaster came from Miller's idea about a really tiny man who can barely move on top a giant, like a sparrow on the back of a rhinoceros.[1] This idea was later refined by Miller's curiosity on how different people would have survived the apocalypse. According to him, some people would have sufficient overall skills to make it through whereas others would only have partial skills needed to survive. That is why Blaster was envisioned as physically very powerful but mentally weak whereas Master was the polar opposite. Their symbiosis was essential to their survival and that is why they formed a unit.[2]

Master saw himself as the true leader of Bartertown (even forcing Aunty Entity to admit it over loudspeaker) and as such imposed "embargoes" that would cut off Bartertown from the power he produced. Max was sent to observe Master and Blaster in Underworld where he learnt that Blaster was extremely sensitive to a high-pitched whistle that Max found in the wasteland, this later gave him the edge he needed to challenge Blaster to a fight in the Thunderdome.

Max defeated Blaster in combat. However, as he was about to be killed it was revealed that Blaster had a child-like mind. Master jumped in to defend him and threatened to cut off Bartertown from power forever. Unfortunately, this led to Blaster's execution and Master's imprisonment in the pig pens beneath Bartertown. However, soon after this he was freed and escaped from Aunty Entity and her forces on board a train stolen from Underworld, and later on the plane used by Jedediah. It is presumed that Master went to settle the old ruins of Sydney with Savannah Nix and her Tribe That Left.

Contrary to popular belief - Blaster was played by two people. Paul Larsson - a plumber from Sydney played masked Blaster due to his enormous physical posture. He was 6'8"ft tall (207cm) and it was his screen debut. When the movie called for the reveal of Blaster's face - Stephen Hayes was utilized for this role. Stephen Hayes was an actor with Down's Syndrome who previously appeared in a 1980 documentary "Stepping Out" by Chris Noonan about actors with Down Syndrome preparing a play for Sydney Opera House. Stephen Hayes also played Johan Gregorious in a 1984 Australian TV Mini-Series "Eureka Stockade". Although he was not outright credited for playing the face of Blaster in Mad Max Beyond Thunderdome he was mentioned at the end of the credits in the "Special Thanks" section, without being credited as playing the character.

Retrieved from "https://madmax.fandom.com/wiki/Master_Blaster?oldid=21467"
Community content is available under CC-BY-SA unless otherwise noted.