The Mad Max Wiki
Register
Don't have an account?
Sign In
Advertisement
in: Films, Characters, Mechanics,
and 4 more
English

Nux is one of the main characters in Mad Max: Fury Road, portrayed by Nicholas Hoult. He is a member of Immortan Joe's army of War Boys and lives in the settlement known as The Citadel, but later allies himself with Max Rockatansky and Imperator Furiosa after feeling responsible for Angharad's death. He also forms a bond with Capable.

Nux was a War Pup that was brought up as a mechanic in The Citadel, a "Black Thumb", after he was taken in by the War Boys. His family was unusual as they stayed together out of love and refused to sell one another out for a better life. When his mother died of illness and his father was sent away to perform dangerous work, however, Nux was left alone and caught the eye of the Citadel. He never saw his father again.[1][2]

Fanatically believing in the Cult of the V8, the surrogate fatherhood of Immortan Joe[3] , and all things mechanical he desperately wanted to get as close as possible to becoming a machine himself. His religious devotion is represented by engine block scarification on his chest and his desire to "die historic on the Fury Road", which is the desire of most War Boys due to the fact they have "half lives". His name was changed to "Nux" because he was a "hard nut to crack."[4] After coming of age and being lucky enough to live this long he turned into a War Boy and became a driver for Immortan Joe, who he, like the other War Boys, views as a god.[5]

Nux - much like the rest of the War Boys - is inherently sick and on the brink of dying because of the environment he's been living in. The first time we see him he's getting a blood transfusion from Max - whom he calls his 'blood bag'. He also uses Max as an adrenaline donor while he's driving. On his neck he's got two deadly tumors that he affectionately calls "Larry & Barry". Nux's life is almost over for him but then he sees Furiosas' escape as the perfect opportunity to prove his devotion to Immortan Joe and entering afterlife in Valhalla.[6] He sprays chrome paint in his mouth to show his worship for mechanical things and to get high before committing suicide by flooding his vehicle with gasoline and ramming it into Furiosa's War Rig. His plan fails.

Nux's mentality is initially of that of a child's; he is driven by impulse, desperation and absolute religious devotion. With time away from Immortan Joe and the War Boys, Nux's personality quickly matures.

Nux first appears at the brink of death when the word spreads that Furiosa has taken Immortan Joe's wives. He watches the War Boys collect their steering wheels from a shrine, but cannot go himself as he is in need of blood due to inherent sickness. When he catches Slit taking his steering wheel, he begs Slit to take him and Max, who is acting as Nux's "blood bag", with him so Nux can die in battle, earning him a place in Valhalla. Nux straps Max to the "lancer perch" (lancers are warboys that throw explosive spears during vehicle combat) of his car and eagerly chases Furiosa alongside the others. They attempt to get close to the Rig, but Furiosa shakes most of them off. Nux gets close to the Rig as Max attempts to break free. Furiosa drives the war rig into a huge oncoming sand storm. Nux continues to chase after her, even as they head into treacherous sand tornadoes. Nux releases fuel onto the floor of his vehicle and lights a flare while maneuvering in front of the war rig in an attempt to stop it with a suicide explosion, but is stopped by Max with his car being rammed and destroyed.

Nux is assumed dead, but has to be hauled about by Max as they're chained together. Nux wakes up in the middle of a fight between Max and Furiosa, immediately helping Max and together they defeat Furiosa. Nux believes they will both be richly rewarded by Immortan Joe for capturing Furiosa and returning his wives, cutting Max's chain while musing that he wants to be promoted to driving the War Rig. Max notices Nux is wearing his jacket and demands it back; Nux misunderstands and tells Max he can ask for more than just a jacket. However, Max heavily winds Nux with a punch to the gut and takes off in the War Rig.

Not long after it stalls, however, as Furiosa had installed a killswitch and only she knows how to keep it going. Max lets her back on the rig but he doesn't want to take the rest of the women. Furiosa insists that they join him, as she is guiding the women to a location from her youth called The Green Place. They ride off while Nux sneaks on board. Nux creates a distraction by locking up the fuel pod's breaks, allowing him to sneak into the war rig. Nux soon reveals himself and after a brief struggle, is thrown from the truck by the girls, who berate him as merely "fodder for an old man's war." He is reunited with the rest of the War Boys, and earns himself the honour of riding with Joe by claiming he knows a way aboard the War Rig, brandishing a scrap of white cloth from one of the Brides' dresses as proof. Slit eagerly yells that he managed to steal Max's boot, attempting to also win Joe's approval, but is ignored.

Once again, the War Boys try to apprehend Furiosa, this time accompanied by Joe and his army. Nux attempts to help Joe, volunteering to shank Furiosa through the spine, leaving her disabled but alive for Joe to deal with personally. Joe hands him an ornate silver revolver, and instructs Nux to kill her with a bullet to the head. Joe then administers the chrome spray to Nux, and promises he will "carry Nux to the gates of Valhalla himself" if he succeeds. Almost immediately, Nux loses his footing on the war rig, dropping the gun in front of Joe, who continues driving with disappointment, leaving Nux ashamed. To further compound his humiliation, Angharad, one of Joe's wives, is killed in the ensuing skirmish. Nux is left distraught as he failed to kill Furiosa, and his "blood bag," Max, was driving the rig when Angharad was killed, making Nux by extension subject to Joe's wrath.

Capable volunteers to go on watch and finds Nux lying morosely in the rear turret, insulting himself and bashing his head. Capable sits and consoles him. He laments of his missed opportunities to enter the gates of Valhalla in a glorious death, as his tumorous lymph nodes, "Larry and Barry", or the night fevers he gets will eventually kill him. Capable tells him that if he has already survived death three times he must be destined to do something great, and gently cradles his cheek, and from there, form a bond with each other. Nux remains in the Rig with the promise of helping the women evade Joe, and Capable keeps the secret of his being there. From then on, Nux and Capable are virtually inseparable.

His stowaway status is revealed when Furiosa, Max and the wives enter the Bog, however. The War Rig becomes stuck in the mud and Nux volunteers to help free it, with Capable touting his mechanical skill. His plan of winching it to a tree to free it is ultimately successful and makes the party's escape largely possible. Capable cuts him free of a length of chain attached to him when he returned to the Rig and he kisses her on the cheek in gratitude. Nux is allowed into the Rig's cab and sits with Capable.

On their travels, the group finally comes across the survivors of The Green Place, the Vuvalini of Many Mothers, which is now uninhabitable. They spend the night with them watching satellites, Nux and Capable passing the quiet moment together. The whole group rides back in the direction of the Citadel on Max's suggestion the next morning. Capable defends this plan and suggests that they pretend that Nux will be escorting them back to captivity. The others agree and Nux replies that this "feels like hope."

Joe sees them riding from his telescope, however, knowing full-well what their real plan is. He gathers his army and gives chase. Slit, riding with the war parties, hurls insults at Nux and calls him a traitor. The two War Boys, seeking to allow their respective vehicles to edge ahead of the other during the chase, spit Guzzolene directly into the engines to give them a "nudge."

Max and Furiosa kill most of the War Boys, while Max gets Joe to kill The People Eater by using him as a human shield. Toast is captured by Joe. Furiosa is impaled and gets weaker as Joe and Rictus gain momentum.

Toast distracts Joe long enough to give Furiosa an opportunity to hook Joe's mask onto the wheels of his car, killing him. Nux is visibly shaken by this.

The Rig then heads toward the canyon, with Rictus still trying to kill the group. Nux tells Capable that he will jam the throttle on truck to buy them time, then return to them. However, Rictus is relentless and tears the engine from Nux's vehicle. Knowing there is no escape and that Max, Furiosa and Joe's wives must escape Nux says goodbye to Capable, whispering "Witness me" and swerving against the canyon. Capable responds with the Vuvalini gesture for remembering those who have died.

By sacrificing himself he kills Rictus and collapses the overpass to put an end to Joe's army, finally getting the death he wanted but dying as a man rather than merely a War Boy.

Nux drives a highly customized 1933 Chevrolet 5 Window Coupe. A classic hot rod stripped of all paint with a big block V8 engine that's both super and turbocharged. His vehicle also has basic nitrous oxide installation engaged manually by a crank valve for additional boost in power. The front of the vehicle is equipped with a lancer's perch. The cross is used to hold Max while he is acting as Nux's blood bag. The steering wheel is custom and completely removable. In the back there is space for a passenger, in the movie it is occupied by Slit. The vehicle is peculiarly capable of driving in reverse at high speeds. Despite vast modifications and personal touches, Nux is not particularly attached to his own vehicle, considering it just as expendable as himself; he doesn't hesitate to flood the cabin with gasoline to make it into a driving suicide bomb to facilitate the glorious death he desires.

Nux hoping to be noticed by Immortan Joe

Nux on a bike

Getting blood transfusion from Max

Fighting with Slit over who gets to drive the car 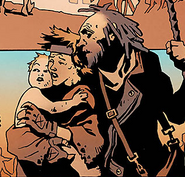 Young Nux and his family 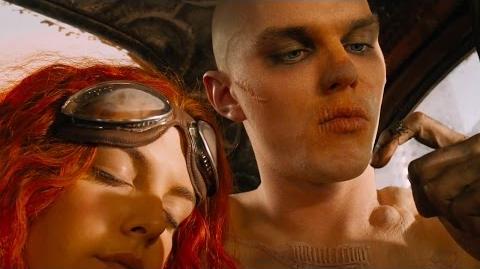