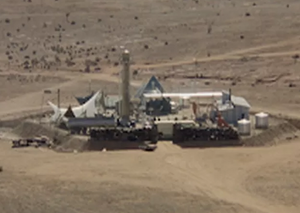 The Oil Refinery, also known as The Compound, was a stronghold located in the Outback. It was governed by Papagallo and his tribe, and was of increasing interest to Lord Humungus for its large reserves of oil.

The Refinery compound was comprised of a series of vehicles, buses, trucks and vans, that surrounded an oil rig and housed a good number of wasteland survivors. An armored yellow bus acted as the Oil Refinery door; it could be moved to allow vehicles to exit and enter the area and then closed to prevent unwanted hostiles from gaining entry into the base. Flame-thrower towers guarded against any hostiles from moving over the walls.

Following the skirmish with Humungus' marauders, the compound was evacuated of residents and, by tapping into the oil's reserves, was set to detonate upon the marauders' entry. The resulting destruction of the Oil refinery greatly diminished Humungus' forces.