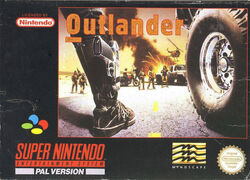 Outlander is a post-apocalyptic action-driving video game for the Sega Genesis and SNES released respectively in 1992 and 1993.

The game was originally developed as a sequel to the first Mindscape game in the Mad Max universe - Mad Max (1990 video game). When Mindscape failed to secure the license's renewal, the title was changed to "Outlander", and specific references to Mad Max were dropped.[1]

Outlander's gameplay combines vehicular combat with on-foot side-scrolling. The main character (which is based on Max Rockatansky) searches for food, ammunition and gasoline in a post-apocalyptic, desert landscape.

Retrieved from "https://madmax.fandom.com/wiki/Outlander?oldid=21263"
Community content is available under CC-BY-SA unless otherwise noted.