The Pole Cats are members of the Gas Town settlement who specialize in abducting assets from other vehicles by means of swift assaults and retreats from swinging poles fixed to moving vehicles.

They are inhabitants of Gas Town who wear masks to prevent them from inhaling fumes from burning derelicts. The big oil rig mentality caused the town to be mainly inhabited by men, not too many women, both of which had too much time on their hands. In effect many of the inhabitants of Gas Town, including the Pole Cats develop fetishes which exhibit themselves leather clad outfits, masks and piercings. The fact that the town was on a big flat plain required for them to have some vantage point so they used 30-40ft high poles on cars, also for mounting other vehicles during road wars.[1]

The Pole Cats firs reveal themselves on the horizon in the Gas Town vehicular armada led by The People Eater. They do not partake in any combat until the final chase sequences. As The War Rig races back to The Citadel the Pole Cat vehicles approach and attack the tanker. The Pole Cats land on the vehicle sustaining severe damage to its crew. A few Vuvalini are killed, Furiosa sustains a major injury from a Pole Cat called "Black/Baby Face". Another Pole Cat picks Toast The Knowing from the cabin of the War Rig while a different Pole Cat throws a smoke bomb inside the Rig and attempts to suffocate Furiosa. The Pole Cats are eventually fended off but one of them manages to pick Max up, which ends in Max releasing the Pole Cat from its contraption which in result throws the Pole Cat under the wheels of the Doof Wagon. Pole Cat vehicles continue the chase without the Pole Cats until the final crash sequence in the Canyon.

The original idea for the Pole Cats came to George Miller from watching Cirque du Soleil pole performers. At first the Pole Cats were supposed to operate from static poles fixed in place on moving vehicles as indicated by first designs by Brendan McCarthy. Later the Pole Cat vehicles would have been equipped with fixed but flexible poles. Miller expressed his doubts if such contraptions would be safe enough to film live action sequences with. Therefore in the 2003 version of Fury Road with Mel Gibson, the Pole Cat vehicles would have been filmed stationary and composited into the chase sequences. During the hiatus the designers and mechanics have developed a new working mechanic for the vehicles which would allow the Pole Cats to safely swing on the arm with the vehicles on the move. The swing arm was placed on a pivot with counterweight at the bottom (made from tyres, engine blocks etc). The swing arm would have been operated by two additional people pushing the arm back and forth on a single axis as opposed to all directions as originally designed. George Miller was pleasantly surprised upon seeing working Pole Cat vehicles, which allowed him to include them in live action sequences with all safety measures in place. 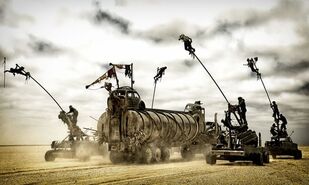 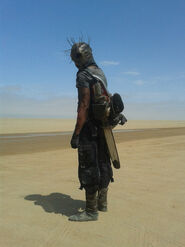 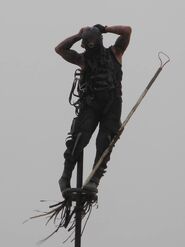 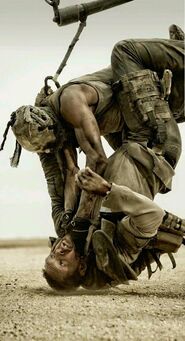 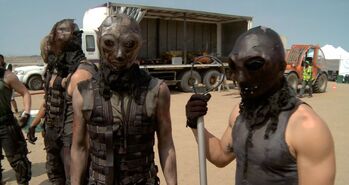 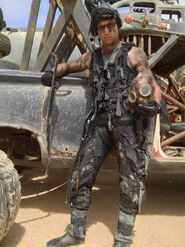 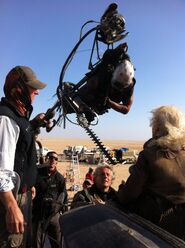 Note From The Creator

Despite me creating this article, I give credit to Taipan for adding the majority of the content on here. Sincerely, The Doof Warrior.