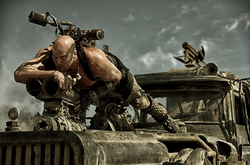 Rictus Erectus is the second and middle son of Immortan Joe and a secondary antagonist in Mad Max: Fury Road. He is portrayed by Nathan Jones.

Rictus Erectus is the youngest son of Immortan Joe. He is first seen during Organic Mechanics health check-up on The Five Wives. Upon finding out that one of the Wives is pregnant and the rest are ovulating, Rictus launched at one of the Wives attempting to rape her. He was quickly stopped by Immortan Joe and thrown out of the Bio Dome. Because of Rictus' aggression towards the woman, Immortan Joe assigned Furiosa to protect The Five Wives.[1] During the events of Fury Road, Rictus joins his father's war party in pursuit of Imperator Furiosa, Max Rockatansky, and the war rig. He is killed when Nux crashes the war rig in the canyon.

Rictus is a massive man, standing nearly 7' tall. He is of large, muscular build and has a shaved head. Like his father, he breathes clean air, and wears an apparatus on his back (fashioned from engine air filters) connected to a nasal cannula. Unlike his father, he does not cover himself in white makeup, and wears armor only on his lower half. On various parts of his armor can be seen baby doll heads of varying sizes instead of the standard Immortan Joe logo like all of Joe's other forces. The baby heads can also be seen on the bumper of Rictus' vehicle, indicating Rictus' child-like nature.[2]

Retrieved from "https://madmax.fandom.com/wiki/Rictus_Erectus?oldid=21438"
Community content is available under CC-BY-SA unless otherwise noted.