The Rock Riders are a bandit group that has taken residence in the canyon out in the Badlands to the east of the Citadel. They appear in Mad Max: Fury Road.

They wear tan leather trousers, tan shirts with strips of frayed brown fabric sewn to them, furs, helmets, and goggles with mesh or knit fabric hanging from them. Bones are used as decoration.

"High in the canyons were the Rock Riders. Motorised mercenaries bouncing from cliff to cliff. They alone could navigate the crags and crevices of the treacherous mountain pads"

The Rock Riders ride the desert cliffs on adapted Gas Gas and Yamaha motorcycles that have been supercharged. They guard the only pass that leads through the wall of mountains where they ambush any vehicles daring to pass through. Any vehicle caught is stripped of valuable parts which are most likely sold to Citadel, Gastown and Bullet farm for supplies. The stripped wreckages of vehicles litter the pass. In Fury Road they make a deal with Imperator Furiosa to block the canyon using explosives to stop Immortan Joe's forces in exchange for 3000 gallons of Guzzolene. The rock riders are more cooperative than their fellow Badlander bandit group the Buzzards as they are willing to at least listen to a proposed deal rather than instigate aggression. That being said, although the Rock riders agreed to the Imperator's deal, negotiations were severed when it was revealed that the magnitude of Furiosa's betrayal to Joe. The Magnitude of the Betrayal was so large in fact that it had attracted three entire war parties from The Citadel, Gas Town and Bullet Farm.

In the middle of writing the movie, Brendan McCarthy took a short break to a beach town on the Australian coast, Byron Bay. He wandered into a surfer's pub which had a big screen playing videos of track bikers doing incredible stunts. That's what gave McCarthy the idea for the canyon tribe, who leap over Furiosa's truck. George miller loved the high-flying action dynamics inherent in the idea and we worked a great deal on that sequence.[1]

Most of the Rock Riders were portrayed by professional motocross riders, recruited from around the world. According to George Miller, they were the one group appearing in Fury Road who were not primarily played by stunt performers, since their riding required even more specialized skills and training. 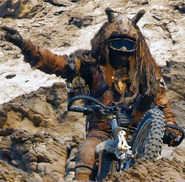