Start a Wiki
The Bullet Farmer 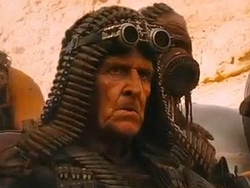 The Bullet Farmer, also known by his former military rank and surname Major Kalashnikov, is a supporting antagonist in Mad Max: Fury Road. He is an old ally and brother in arms to the leader of the Citadel, Immortan Joe (Colonel Joe Moore), and is portrayed by Richard Carter in the film. He was the leader of a group known as the Bullet farmers.

Major Kalashnikov was a professional soldier and army officer, serving under the command of Colonel Joe Moore during the Oil and Water Wars. After the chaos ensued in cities, he became his right-hand man, in the Colonel's organized gang, comprised of ex-soldiers. Well armed and equipped, they evacuated from the coast area further into the outback, marauding and pillaging resources from survivors. Eventually they encountered the artesian water source that will become the Citadel in the future. But the site wasn't vacant - a major battle ensued, and in the end only a duo of Colonel Moore and Major Kalashnikov were left alive of a small assault team, and they eventually slaughtered the enemy forces. Colonel Moore became Immortan Joe, and he later assigned his trusted henchman Major Kalashnikov to restore and command the abandoned lead mine to the west from the Citadel, to manufacture small arms, gunpowder and ammunition. He became the guardian, judge and executioner - the Bullet Farmer.[1]

The Bullet Farmer assisted Immortan Joe in the pursuit of his captured wives. After the deaths of Angharad and Joe's infant son, he launched a one-vehicle night raid on the War Rig in an attempt to recapture the four surviving wives. He was blinded when Imperator Furiosa shot out his vehicle's spotlight with an SKS, causing shards of hot glass from the exploding light to spray into and damage his eyes. The Bullet Farmer, however, donned a blindfold and continued his pursuit in a fit of insane rage, calling himself the "scales of justice" and "conductor of the choir of death" as he fired randomly at the stuck War Rig and its occupants.

Soon after starting his blind rampage, he was killed by Max, who single-handedly destroyed his vehicle and brought his bandoliers back to Furiosa as proof of his demise.

The Bullet Farmer is obsessed with firearms and feels naked without a gun. He has had some of his teeth replaced with bullets and wears clothes largely consisting of ammunition (bandolier) pouches, including a belt on his head resembling a keffiyeh. He drives a vehicle called The Peacemaker, which consists of the hull of a Valiant Charger mounted on a Ripsaw light tank chassis.

His surname, Kalashnikov, is shared with Mikhail Kalashnikov, the inventor of the AK-47 and many other firearms.

The Bullet Farmer before being blinded

The Bullet Farmer after being blinded

Retrieved from "https://madmax.fandom.com/wiki/The_Bullet_Farmer?oldid=21268"
Community content is available under CC-BY-SA unless otherwise noted.