The Gigahorse is a custom vehicle driven by Immortan Joe.

The vehicle is built from scratch with a powerful and sophisticated drivetrain and highly modified body. The car is built on a custom chassis, with a body made of two 1959 Cadillac Coupe de Villes sitting on top of each other.[1]

The film's original designs called for a turret installed on top of a single Coupe de Ville but, as the production designer Colin Gibson explained: “In a world where nobody had one of anything, it seemed a fait accompli that he would have a pair of 1959 coupe DeVilles,” and so the design was changed.[2] Peter Pound - concept artist explains the reasoning for having Coupe DeVilles as the body of The Gigahorse:

The earliest concept of The Gigahorse, then called Warlord Warchariot

Gigahorse concept still with a turret

The bottom shell is widened and equipped with a custom windshield. The upper Cadillac is stock width but has been fabricated to function as a turret with a harpoon gun and a flamethrower in the back. To signify Immortan Joe's power and wealth both those guns have wooden finish. The front end is standard 1959 Cadillac equipped with a custom heavy duty plow. The Gigahorse is approximately 4 meters high without the flags and weighs in at 10.5 tonnes[3]. It also appears to have bulletproof glass in the movie. 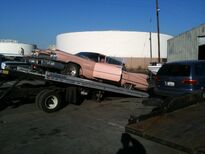 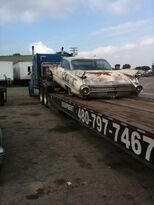 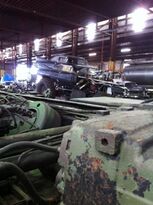 The Gigahorse is powered by two Chevrolet 502Cid (502Hp) Big Block V8 crate motors with fabricated manifolds and functioning 8/71 superchargers. Both engines are connected through a custom gearbox. Anthony Natoli of Natoli Engineering designed the straight cut gear system joining the two engines. The gearbox adapter was then modeled by the movie's art director Jacinta Leong[4] in AutoCAD, all the components were waterjet cut, assembled and originally connected to a Turbo 400 automatic transmission. This transmission had to be rebuilt after each day of filming by the film's main mechanic - Mark McKinley. Because of this inconvenience the Turbo 400 was eventually replaced with Allison automatic truck transmission. The engine setup is fully functional generating approximately 1200 horse power. The vehicle also has a non functioning set of turbochargers with their rotors removed and feeding into superchargers. Originally the two engines were supposed to be dummy motors made of fiberglass with a single real engine hidden inside, but the production designer - Colin Gibson provided additional budget which allowed to equip the Gigahorse with an actual working engine setup.

The vehicle is equipped with tractor tyres, the rear ones being 70" in diameter. The rims and hubs are custom made. The differential and reducer systems were taken from a pair of Terex four-wheel drive front-end loaders. The massive hubs gave a 16:1 drive ratio for a 95km/h top speed, but according to Collin Gibson The Gigahorse managed speeds up to 125km/h.[5][6]

The Gigahorse is first seen in a flashback running over Glory the Child. Then it is seen again shortly after Immortan Joe notices the War Rig went off road with his precious cargo. It is brought on the ground via human-powered elevator platform and ready to pursue Furiosa. The vehicle is driven by Immortan himself, on board is his son - Rictus, his Prime Imperator, a History Woman - Miss Giddy and several other high ranking officers.

The vehicle, however is not seen directly engaged in road battle until the final scenes of the movie where it plays part in Immortan Joe's demise. Furiosa, approaching the canyon on her way back to The Citadel, tries to ram The Gigahorse off the road; however, Joe engages the superchargers of The Gigahorse and gets ahead of her. He then brakes hard which further damages the already fatigued engines on the War Rig. Furiosa decides to get on the back of The Gigahorse and throws an explosive javelin into the back door of the vehicle, but it does no damage. Rictus emerges from the back of the vehicle right after and jumps onto the War Rig to snatch Cheedo, who is begging to be taken on board of The Gigahorse. Cheedo then helps Furiosa, who is hanging from the side of the vehicle, to get on board unnoticed. She grabs a harpoon chained to one of the harpoon guns in the back and tries to attack Immortan Joe through the open back door, but she has to face the Prime Imperator first. After defeating him with help of Nux, Furiosa is seen hanging from the side of The Gigahorse with a harpoon in her hand as she tries to make her way towards the driver's door of the vehicle.

Immortan Joe notices her, rolls down the window and tries to shoot her, but Toast grabs his arm. He punches her in the face, but Furiosa rams the harpoon through the window and knocks the gun out of his hand, then hooks Joe's mask and his jaw. "Remember me" she says and drops the chain onto the back wheels of The Gigahorse, which spools the chain and swiftly rips Joe's mask off, along with most of his lower jaw.

The Gigahorse is then driven by Toast through the passage and by Max into The Citadel with Immortan Joe's body wrapped in cloth and put on the steaming hot engine of the vehicle. It is then let on a platform into The Citadel driven by one of the Vuvalini. 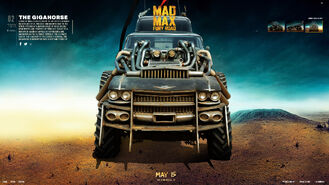 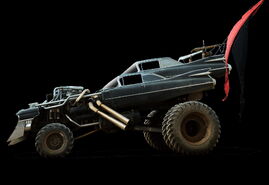 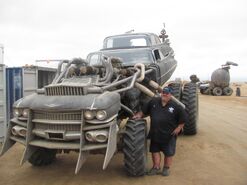 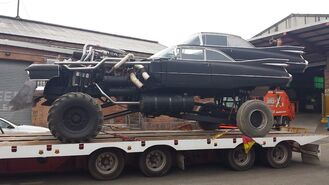 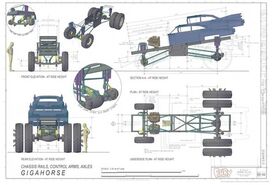 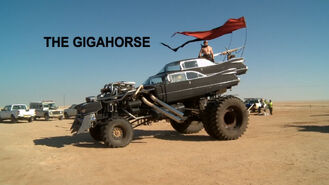 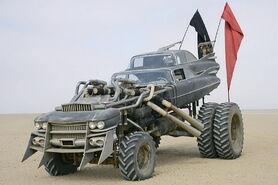 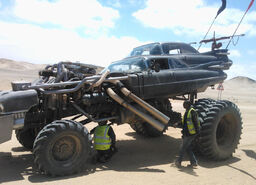 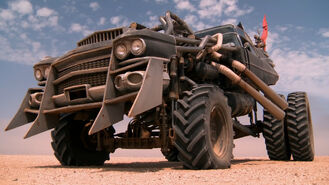 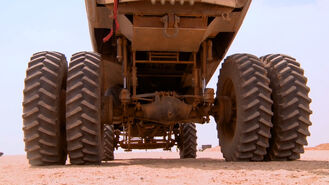