Start a Wiki
The Nightrider 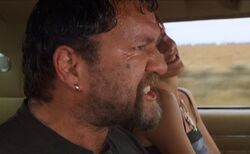 Crawford Montizano, more commonly known as "The Nightrider" was a member of Toecutter's merciless motorcycle gang. He was portrayed by Vince Gil and appears in Mad Max.

Crawford "Nightrider" Montizano was a berserk motorcycle gang member of Toecutter's gang. Little is known of his imprisonment, with the events of Mad Max showing the conclusion of Nightrider's tale. Having broken police custody in Sun City and - with a punk woman named Marmaduke by his side - he attempted to flee from the Main Force Patrol (the Federal highway police unit) in a stolen MFP Pursuit Special.

Though he managed to elude his initial pursuers: Roop, Charlie, Sarse, and Scuttle; the Nightrider then encountered the MFP's "top pursuit man", leather-clad Max Rockatansky. Max, the more skilled driver with a well-tuned vehicle, pursued the Nightrider in a high-speed nerve-wracking chase. With fear and terror in his eyes, Nightrider began to weep, not focusing on the road - the chase resulted in the death of the Nightrider and his girl in a fiery car crash.

His body is later picked up by the leader of his gang - Toecutter in a coffin at a station in a remote town in the Outback and taken away by Toecutter himself.

Nightrider definitely had some reputation that surrounded him, no doubt from the abilities he possessed and his commitment to Toecutter. When collecting his body from the station master and also through Johnny the Boy's psychotic mumblings, we're taught that Toecutter holds Nightrider as somewhat of a legend, commenting: "The Night Rider, remember him when you look at the night sky."

Nightrider's legendary status reveals itself well to what we actually do see of him before his death. He single handedly (it's led to believe) broke free of the Halls of Justice and along with this feat managed to steal a Pursuit Special in the process. His driving abilities (at least in a car) are questionable due to the amount of damage he seems to have taken before the chase, and although he puts up a reasonable lead, is eventually shut down when his personality seems to shift from psychotic to fearful in the face of further imprisonment or death.

His mental health like stated above is in question. It appears that Nightrider has a bi-polar disorder that viciously seems to alternate from extreme manic euphoria to an unconfident trembling fear when faced with a dilemma he doesn't think he can excel at. As far as Toecutter's Gang goes, he's no different from any of them - all of which seem to be psychotic in one way or another.

Retrieved from "https://madmax.fandom.com/wiki/The_Nightrider?oldid=20940"
Community content is available under CC-BY-SA unless otherwise noted.