Thunderdome is a gladiatorial arena in Bartertown where conflicts between two parties are resolved through combat. It is one of several rituals that Aunty Entity upholds in Mad Max: Beyond Thunderdome. It consists of a giant domed cage of metal with various weaponry pick-ups locating round its sides.

According to George Miller[1]:

The idea for harnesses with rubber straps came from baby bouncers. The whole construction was 30 ft high, the fighters would go up to about 20 feet. Mel Gibson was doing all the stunts in that sequence, initially the directors wanted to use only his close-ups but Mel turned out to be more skillful in the battle than the stuntmen. The rubber bands were not powerful enough to lift the actors so the special effects team used hand-controlled compressed air cylinders which could literally shoot Max and Blaster from the floor to the ceiling in a matter of seconds. According to Mike Wood - special effects co-ordinator, this technique was inspired by an effect in Mary Poppins.[2]

Dr. Dealgood acts as the ringleader that rallies the crowd prior to combat within the dome and states the memorable sole rule: "two men enter, one man leaves".

Officially it seems there are no other rules, Dealgood advises Max to get to the weapons and to use them any way you can, before stating "I know you won't break the rules, because there aren't any."

Despite this statement, it appears there exists a series of physical laws within the dome. Upon starting, both participants are attached to a bungee cable that grants them increased athletics, which benefits them both in combat and acquiring the weapons that are perched higher up in the cage.

The various weapons available for use within the dome include: a Chinese guan-dao spear, a chainsaw with limited fuel, a spiked mace and a metal sledge-hammer.

The official purpose of Thunderdome is to preserve order in Bartertown by bringing feuds to a quick and decisive end. By the time Max Rockatansky arrives, it has developed into a major blood sport and spectacle attended by carnival-like celebrations. Aunty plays to this crowd, personally opening each fight as "another edition of Thunderdome!"

Thunderdome also presents Aunty's only legal means of regaining control of the town from Master Blaster. Unable to face Blaster in the arena herself, she surreptitiously puts Max forward as her champion. Max's life that takes place after the events of the arena are governed by the moral decision he makes within it - his choice to not kill Blaster, who suffers from a form of mental retardation. It is the moral dilemma and its consequences that subtitles the film "Beyond Thunderdome".

Another Thunderdome inspired by the original is located in Gas Town and features many participants fighting against each other instead of just two. Unlike the original one, this one is inside a building and is noticeably larger.

Max goes to fight in this Thunderdome in order to win the prize which is a V8 engine and which Max needs to rebuild the Interceptor. When only the final two contestants remain, the one being Max and the other being a Buzzard wearing a body armor with sharp blades attached to it, he receives help from Glory's mother who hands him a flare. Max lights the flare using it to burn the Buzzard's eye out, he then rips off the Buzzard's helmet and uses it to kill him thus winning the battle. 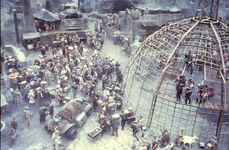 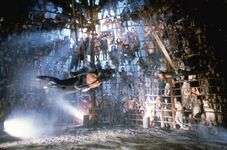 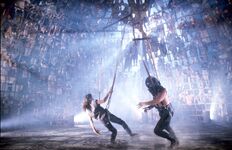 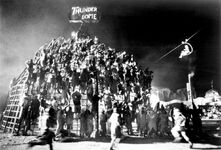