Start a Wiki
Toast the Knowing 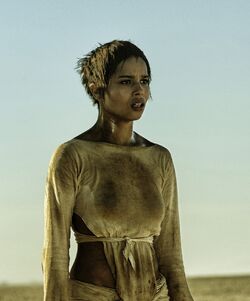 Toast the Knowing is one of the "Five Wives" — the prized possessions of Fury Road's villainous warlord Immortan Joe. She is portrayed by Zoë Kravitz.

The name 'Toast' came from the nickname of Fury Road's crew member: Shyam "Toast" Yadav, a visual effects data wrangler. On July 8th 2012, one day before the first day of shooting George Miller was having dinner with actress Zoe Kravitz and he was telling her about the French Toast Gang[1] - a personal project of Shyam "Toast" Yadav. Zoe loved the idea of that project and she asked if her character - the last of the Wives who did not have a name yet - could be named after "Toast". Shyam agreed and the character's name was changed to 'Toast' in the script.[2]

According to Fury Road writer Nico Lathouris, Toast has come from the Wasteland. She was most likely passing through War Boy's territory and was captured by them. According to him, she most likely has some experience from the Wasteland, has been taught to defend herself, be able to drive a car and operate weapons. This sets her apart from other Wives, most of which were sheltered and are not familiar with the harshness of the world outside of The Citadel.[3]

Throughout the wives' journey with Furiosa,[4] Toast takes charge of maintaining and keeping track of weapons and ammunition. Toast makes sure to alert Max and Furiosa that their most powerful gun only has three bullets left. She is trusted so much with the weapons that she is given a pistol by Furiosa in order to hold Nux at gunpoint. In the final battle against Immortan Joe, Toast is captured by a Pole Cat and placed in Joe's car. She is used to taunt Furiosa and the remaining three wives when she is pressed against the window.

Joe uses Toast as leverage to keep Furiosa away from him during the final fight. He holds a gun to her head and seems to be willing to shoot her should Furiosa get too close. She does, however, play an important role in Joe's downfall, grabbing his arm and preventing him from shooting Furiosa. When Joe dies, Toast takes control of the Gigahorse and spits on Joe's body.

Dressed in white like all the "wives" of Joe, Toast is the shortest of the group, and also wears her hair much shorter than the other four wives.

Toast seems to have much more survival knowledge than the rest of the wives. She knows how to put together and reload many different types of guns, suggesting she spent some time in the Wasteland before becoming a wife. She also has a good memory, taking stock of their bullets and being able to remember how many each gun had thereafter.

Retrieved from "https://madmax.fandom.com/wiki/Toast_the_Knowing?oldid=19260"
Community content is available under CC-BY-SA unless otherwise noted.