Tomorrow-Morrow Land was a mythical location embedded in the tales of The Lost Tribe and corresponded to the civilization that existed before the Pox-eclipse. It is the remains of pre-fall Sydney, Australia.

What little information the children from The Crack in the Earth had about the location they came from was gradually turned into a legend. With help of word of mouth storytelling and a few slides that had barely any connection with each other, the Lost Tribe created a legend where the Tomorrow-Morrow Land was their place of origin with 'high scrapers', 'rivers of light', 'sky raft' and their savior - Captain Walker. The images they had of this place are in fact pictures of Sydney from before the Pox-eclipse. Sydney became a dangerous place after the fall as bandits and weather took a toll on the survivors, forcing many to flee the ruined city and find safety in the wastelands. Sandstorms blanketed the city over the many years, burying numerous buildings and blocking roads as well as turning the bay into a massive sand dune.

The tribe eventually reaches their Tomorrow-Morrow Land onboard "The Flying Jalopy" with Jedediah as their pilot. It is revealed to them that the location is now a dilapidated city smothered in sand and dust. The Sydney Harbour is dried up and the bridge destroyed. Buildings are destroyed as well, with only their bare bone skeletons in place. The Lost Tribe settles in that place and tells "The Tale" each night with torches in windows to guide lone wanderers to a place they can call 'home'.

Dennis W. Nicholson worked on the model of destroyed Sydney aka 'Tomorrow-Morrow Land' The Lost Tribe eventually settles in. Unfortunately, the models were too big to be stored and had to be destroyed. 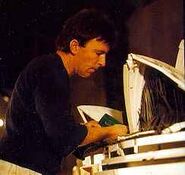 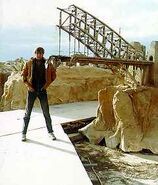 Filming the 'fly-through' Sydney at the end of the film

The Sydney miniature set on location 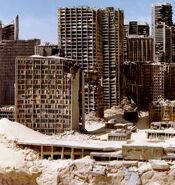 Close up of the buildings

Close up of the Sydney Harbour Bridge
Community content is available under CC-BY-SA unless otherwise noted.
Advertisement