Take a look at these amazing wasteland beasts! If you had to choose one as your best chance at survival, which of these would be your favorite pick? 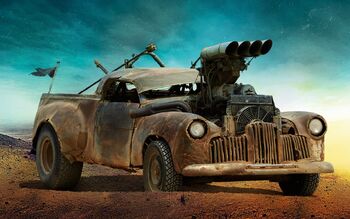 CRANKY FRANK
This highly customized vehicle is a Holden 50-2106 (unofficially nicknamed "FX" as part of the "F" range), with a Coupe Utility aka. a 'Ute' body. Originally home modified into a rat rod by an unknown father and step son duo in Australia and affectionately called "Frank" or "Cranky Frank" it underwent a lot of changes to its design. Its first incarnation as a rat rod showed the vehicle with covered engine bay, extremely lowered suspension and chopped roof. The doors were held with a latch lock and there didn't seem to be any seats inside. The bonnet was later removed to unveil a massive big block engine with a supercharger and a custom injector hat made of four truck exhaust pipes. The setup was completely functional as presented in a YouTube video and the vehicle was later displayed at motor shows. 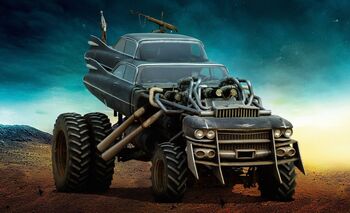 THE GIGAHORSE
Take one 1959 Cadillac Coupe DeVille body and split it open down the middle. Then insert another Coupe DeVille body into the first one and weld like mad. The result will be something that looks like two humping Las Vegas condominiums. Finally, all that is mounted to a huge truck chassis and powered by two turbocharged V-8 engines mounted alongside each other. It’s the most audacious and fascinating vehicle in Fury Road. 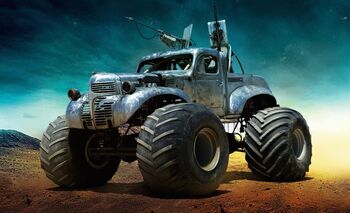 THE BIG FOOT
It’s a monster truck shoved under the sheetmetal of what appears to be a 1939 or 1940 Fargo pickup. And Fargo, for those scoring at home, was what many Dodge trucks were called when sold for export to (or built in) countries like Canada, Turkey, and, yes, Australia. Riding on 66-inch-tall Goodyear tires and featuring four feet of suspension travel, this beast, according to the official materials, is powered by a supercharged V-8 turning a Turbo 400 automatic transmission. The massive axles are reportedly from a military tanker. And the name of the character who drives this is “Rictus Erectus.” Giggle. 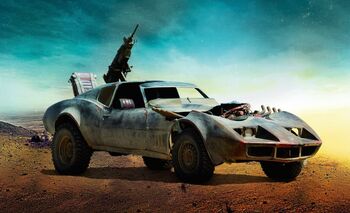 BUGGY #9
Australian automotive history is filled with chapters that are both obscure and bizarre to American eyes. Case in point: the Perentti. Because the Corvette wasn’t exported to Aussie Land and was left-hand-drive-only, in the early 1970s, the maniacs at a Sydney-based company called Custom Performance Modification decided to plant a copy of the C3 Corvette’s fiberglass body atop the chassis of a Holden one-ton truck. But because the truck was 22 inches longer than the real Corvette and had a 120-inch wheelbase, the result was, well, strangely proportioned. It’s kind of awesome but truly wacky. For the moviemakers, however, a Corvette built on a big, rugged truck frame offers several advantages. So Buggy #9 was created as sort of a last-days-of-disco-era Vette running through misery while chewing on a fistful of meth. And it should be enough to leave many North American gearheads leaving theaters muttering to themselves in a bewildered haze of confusion. 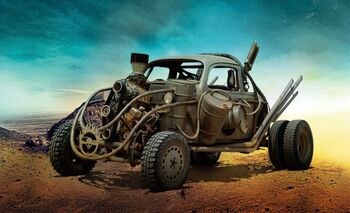 FDK
There are several obscene things for which “FDK” may stand, so please entertain yourselves thinking of them. In Fury Road, however, FDK is this blown, V-8–powered contraption to which the filleted body of a Volkswagen Beetle is tack-welded. In the story it acts as part of a convoy guard that throws off flames with fuel from barrels integrated into its structure. In sum, it’s a perversion of everything the original Beetle was supposed to be. That’s good, isn’t it? 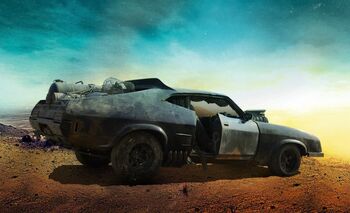 INTERCEPTOR
Mad Max would only be Slightly Peeved Max if he didn’t drive the classic 1974 Ford XB Falcon. And the Falcon is back—as it has been for every film in the series. But it’s been beat up, sandblasted, rusted, and left to rot in the most gloriously cinematic of ways. “A legend spotted in the gutter,” explains designer Colin Gibson, “rusted through and rattling with too many repairs and far too few original parts.” Still, the supercharger is intact and it is the last of the V-8 Interceptors. It wouldn’t be a Mad Max movie without it. 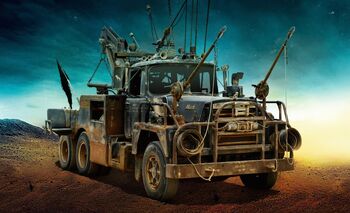 MACK
With its population concentrated along the continent’s coasts, Australia’s massive center is a sea of land across which large trucks move materials and products in multi-trailer road trains. So big trucks matter in Australia. And in the Mad Max series, the big truck that matters most is the Mack R-series. In The Road Warrior, it’s an R-series tractor-tanker that is at the center of much of the action. In Fury Road there’s “Mack,” an R-series wrecker tasked with trailing the action and scavenging the battlefield for precious scrap and equipment. It’s an homage of sorts and its own beastly thing. 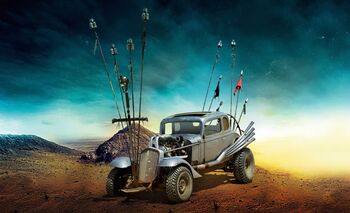 THE NUX CAR
The greatest ’32 Ford five-window Deuce coupe in cinematic history is, of course, John Milner’s yellow rod from American Graffiti. The Nux Car from Fury Road can’t even come close to that car. First, it’s apparently a ’34 model, so it can’t be a Deuce. And second because it’s a Chevrolet. In compensation it does feature a turbocharged V-8 that, at least according to the press materials, also huffs in a steady diet of nitrous oxide. And, apparent in the photos, the fabricated chassis includes a beefy-looking independent front suspension. However, the exhaust system routed across the doors does mean the driver has to get in through the roof. 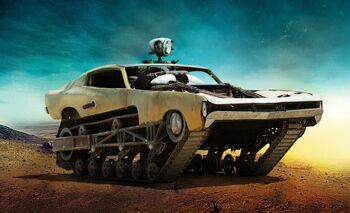 PEACEMAKER
In the mix-and-match world of classic Australian muscle, the 1971–78 Chrysler Valiant Charger is something of a companion to Ford’s XB Falcon that plays so prominently in the Mad Max mythology. So in Fury Road there are at least two Valiant Chargers featured. This one, called Peacemaker, isn’t so much a Chrysler of any sort as it is some classic sheetmetal stretched out over a U.S.-made Ripsaw light-tank chassis. In the film, it’s piloted by a character called The Bullet Farmer and is used in several socially malevolent ways. 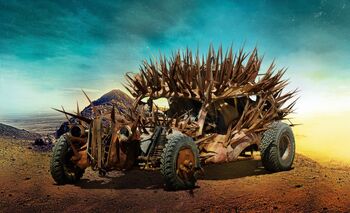 PLYMOUTH ROCK
Built around the desiccated remains of what appears to be a 1937 Plymouth sedan, this metallic hyena’s mission is to scrounge the wasteland looking for carrion to consume and repurpose. The spikes were not part of Plymouth’s original design. Hey, maybe it’s a ’38? Nah, it’s a ’37. 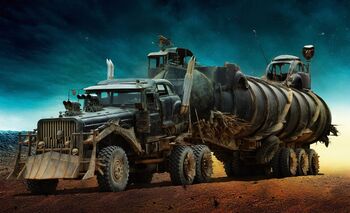 THE WAR RIG
There’s big, there's bigger, and then there's holy-crap gargantuan. A six-wheel-drive Tatra semi powered by two supercharged V-8s seems big enough to qualify for that last category. That it’s a tanker that shuttles precious fluids from fiefdom to sinecure and back again only makes it more mysterious and sinister. Well, that plus all the skulls serving as decoration. The semi cab seems to have been extended with the rear half of a late-1940s Chevrolet sedan. 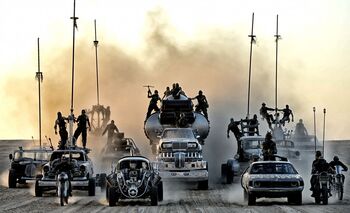 Retrieved from "https://madmax.fandom.com/wiki/User_blog:XD1/INTRODUCING:_The_Vehicles_of_Fury_Road?oldid=7018"
Community content is available under CC-BY-SA unless otherwise noted.