Warrior Woman is a member of Pappagallo's tribe, she is portrayed by Virginia Hey in Mad Max 2

Upon first meeting Max, the Warrior Woman was wary of him, not altogether appreciating Max's delivery of their wounded friend. She berated him for his apparent insensitivity to their situation, by only wanting his bartered gasoline so that he could leave immediately; "Trading in human flesh! Mercenary trash!"

She was later proven wrong about the Road Warrior when he delivered the promised prime mover. and helped save the fort when Humungus' marauders attacked. She went to him afterwards, admitting that she was wrong about him and apologizing.

During the diversion Max created for Pappagallo's tribe's escape, the Warrior Woman accompanied Max upon the Mack R-600. During the road war, she was wounded by Wez, who fired three darts into her chest, and fell over the side of the tanker trailer, getting caught in its barbed wire defensive measures. Seeing she's still alive, The Mechanic attempts to pull her up to safety, but both are ultimately dragged from the tanker and dropped to the road below, where they were presumably run over and killed by pursuing vehicles.

Originally the Warrior Woman was envisioned as a man, but according to George Miller, the sexuality in the Wasteland became interchangeable, so it was decided that the character should be a woman. Another character whose sex was changed was the Golden Youth, originally envisioned as a woman.[1]

The Warrior Woman was also designed to be attractive to Max in a specific way. Byron Kennedy had especially put emphasis on Warrior Woman's large scar across her cheek as a kind of physical paradox that would render her attractive to Max. "Otherwise Max would be too shy and too ethical to get involved with her"[2]

The Warrior Woman acted as guardsman within the Oil Refinery and had very keen eyesight. This ability gave her an advantage when using her compound bow and arrow. 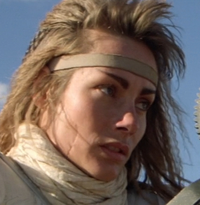 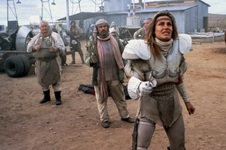 Retrieved from "https://madmax.fandom.com/wiki/Warrior_Woman?oldid=21189"
Community content is available under CC-BY-SA unless otherwise noted.