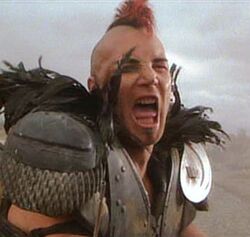 Wez is a member of Lord Humungus' Marauders, and acts as one of the main antagonists in Mad Max 2.

Wez is first encountered during the opening chase of the film.  He and several other marauders pursue Max.  Max manages to avoid their attacks, resulting in Wez being hit by friendly fire.  However, he is unfazed, as he merely pulls the arrow out of his arm, holsters it, and rides away.

Wez is later seen harassing the population of an oil Refinery, attempting to enter.

After his companion Golden Youth, is killed by the feral kid, Wez becomes even more enraged and determined to capture the refinery, to the point where Humungus has to restrain him with chains.

He is turned loose during the marauder's pursuit of the tanker truck, driven by Max.  He eventually climbs onto the hood of the truck, only to be killed when Humungus rams the tanker head-on.

George Miller instructed Vernon Wells to fill in Wez's backstory and Vernon imagined Wez as a former Vietnam veteran. However, there is a lot of controversy regarding Wez's sexuality and his relationship with the Golden Youth. George Miller explicitly stated that certain characters, including the Golden Youth, were originally written as the opposite sex of what they are in the movie. (In other words, the Golden Youth was originally written as a female.) Miller explained this by saying that sexuality became interchangeable after the apocalypse.[1]

Vernon Wells, on the other hand, explained on multiple occasions that Wez's relationship with the Golden Youth was purely platonic, resembling a father-son relationship. Furthermore, he explained that there was a scene cut from the movie showing Wez saving a child (the Golden Youth) from marauders and raising him as his own.[2] There is no evidence of that scene ever existing, not even in the earliest drafts of the script (preceding the widely available April 1981 early draft).

Max first spots Wez along with a gang of marauders cannibalizing a farm vehicle whom have set a farm shack on fire and hung three of its occupants on a tree. They notice Max and chase after him. Only the fastest vehicles can catch up with Max. The following scene is the opening chase scene of The Road Warrior [3].

Wez drives a Kawasaki KZ 900 or 1000 made to look like Suzuki Katana. The reason being the production crew saw Suzuki Katana in a magazine during production, but couldn't get a hold of it in Australia, so they modified a Kawasaki instead.


Retrieved from "https://madmax.fandom.com/wiki/Wez?oldid=20013"
Community content is available under CC-BY-SA unless otherwise noted.