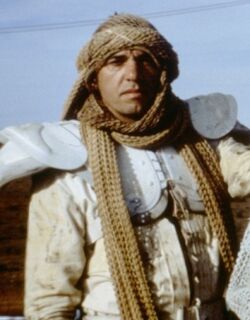 Zetta was one of the villagers at the compound. He was portrayed by William Zappa in Mad Max 2.

Zetta was initially very critical of Max Rockatansky when he arrived at the compound. He accompanied Max and the other villagers on the big rig when it left the refinery. He was situated at the rear of the tanker in an added on parapet throwing Molotov cocktails at the pursuing vehicles. He is the first villager to die on the rig when one of Lord Hummungus' marauders threw a grappling hook into the parapet he was in attempting to pull it down. Zetta's Leg was pinned to the parapet and was unable to escape, when the marauders vehicle crashed pulling the parapet down along with Zetta onto the road exploding his remaining Molotov cocktails

This article is a stub. You can help The Mad Max Wiki by expanding it.

Retrieved from "https://madmax.fandom.com/wiki/Zetta?oldid=20233"
Community content is available under CC-BY-SA unless otherwise noted.